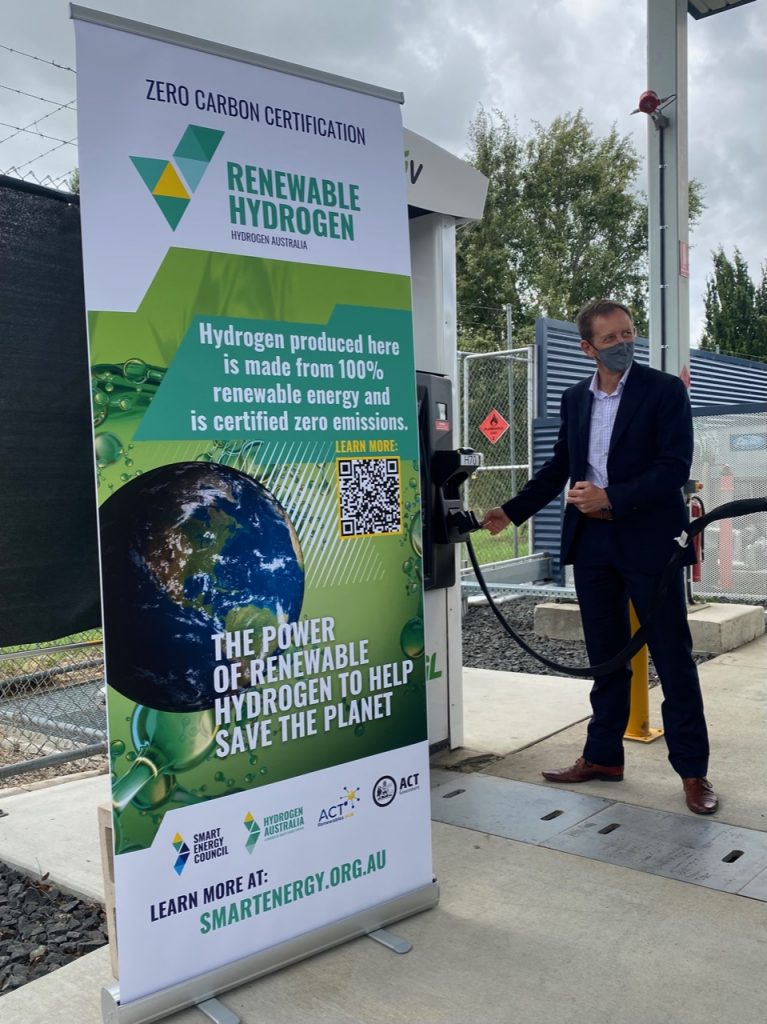 The ACT Hydrogen Refuelling station: a glimpse of the future

In a first for Australia, the ActewAGL hydrogen refuelling station in the Australian capital of Canberra has been certified with renewable green hydrogen produced from 100 percent renewable energy with zero carbon emissions.

Speaking at the Certification event at the ActewAGL hydrogen refuelling station, the ACT Minister for Energy and Emissions Reductions stated all investment and production in the hydrogen industry should be hydrogen made using renewable electricity

“The Smart Energy Council’s scheme is important because it will enable hydrogen and related products to be certified as zero emissions. It is critical we can track how these products are manufactured so customers can be certain the product they select is genuinely zero emissions,” Minister Shane Rattenbury said.

The refuelling station can produce up to 7,884 kilograms of renewable hydrogen each year using 100 per cent renewable electricity from the ACT grid and potable water from the mains.

Within Australia there is a clear desire from industry for the implementation of a domestic and an international scheme to assess embedded emissions in hydrogen products. The Smart Energy Council’s Zero Carbon Certification Scheme which focuses on renewable hydrogen and its derivatives, plays a critical role in accelerating the uptake of renewable production methods, consequently driving down the cost of production

The Smart Energy Council is now turning its attention to Yara’s planned green ammonia plant in the Pilbara and anticipates the ammonia production facility will be pre-certified by late July 2022.

The Smart Energy Council is also working with the Green Hydrogen Organisation to develop a global standard for green hydrogen.

In other developments, total generation from Australia’s wind and solar plants grew 22 per cent in 2021 compared to the year prior, setting a new record and supplying more than 32 per cent of Australia’s electricity needs. In turn coal generators’ market share dropped below 60 per cent and gas generation fell to 7.8 per cent.

In less positive news, Climate action group 350.org Australia has revealed that during 2020-2021 fossil fuel companies donated more than $955,000 to Australia’s three major political parties, a rise of $80,000 on the previous year. The ruling Liberal Party received the majority, at around $507,000, and the federal opposition Labor party was gifted about $392,000.

Woodside, which is pumping millions into carbon capture and storage trials, was the largest fossil fuel donor.

Will the donations sway future policies in what remains a very pro fossil-fuel county? Australians go the polls in just a few months this year to elect the next federal government.  For eight years the ruling Liberal national party has strongly favoured fossil fuel endeavours and Australia – the land of bountiful sunshine and wind – sits shamefully at the top of the league board globally for greenhouse gas emissions per capita.