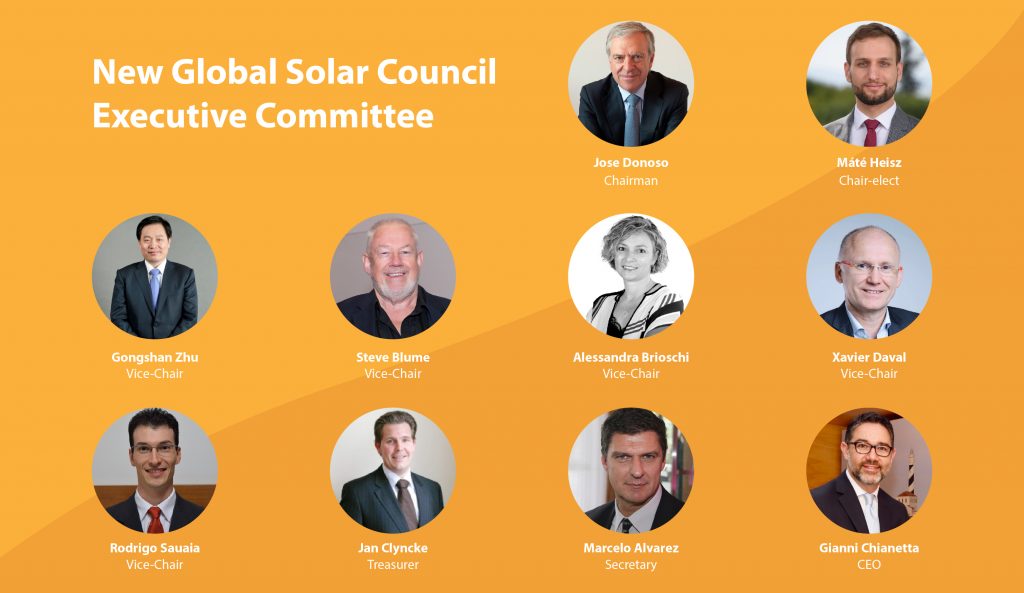 GSC new Board and Executive Committee elected for 2022-2023

In 2021 solar power really emerged as the winning card for accelerating the global energy transition, and the Global Solar Council endeavored to maximize the visibility of the vast spectrum of benefits solar PV can help achieve in both mature and emerging markets, at all scales and off-grid.

The GSC Virtual Forum with the support of SPE and Get.Invest and the webinars of the Emerging Markets Task Forces on South East Asia, Africa and Latin America all contributed to shed light on the vast potential of solar PV in these dynamic markets fundamental for a sustainable future and a just transition. Solar PV can drive the sustainable energy transition through decarbonisation, decentralisation, digitalisation, and democratization, to accelerate much-needed progress towards the Sustainable Development Goals and meet increasing electricity demand around the globe.

“Solar PV is not only cheap and clean, but it’s also very versatile. It can bring electricity where conventional means have failed changing peoples’ lives. Private funds are now also ready to flow in the market, but they need improved legal certainty and clearer regulatory frameworks. GSC’s work in 2022 will act in this direction”, commented José Donoso, Chairman of the Global Solar Council.

In early 2021 GSC has reached out to its members with a survey to build post-pandemic scenarios for solar PV and contributed the analysis to SolarPower Europe’s Global Market Outlook 2021-2025. The survey showed an improving outlook for solar business, with 81% of respondents expecting growth in sales in 2021 compared to 72% who reported a positive expansion in 2020. The improving picture was underscored by respondents’ assessment of how governments are supporting solar PV in terms of post-pandemic plans and green recovery policies compared to the support provided in the midst of the health emergency in 2020.

A dedicated webinar was also organized, pointing out the main actions required from regulator in order to boost the growth of the industry, as gathered from the respondents to the survey. In the context of support to national markets, GSC carried on a joint action with GWEC, IRENA and the Asociación Mexicana de Energía Solar (ASOLMEX) in support of renewables opposing the retroactive energy reform proposal in Mexico.

Willing to strengthen presence at the UNFCCC COP, GSC has joined the Marrakech Partnership for Global Climate Action (MPGCA) to actively contribute to global climate action representing the world’s solar industry, and took part to the cornerstone energy event at COP26, the MPGCA Energy Action Event in support of the Climate Action Pathway on Energy.

GSC is also among the signatories of the Global Coal to Clean Power Transition Statement, one of COP26’s flagship initiatives, committed to rapidly scale up deployment of clean power generation and energy efficiency measures, and to promote technologies and policies in this decade to achieve a transition away from coal power generation. GSC will continue cooperating with the MPGCA and IRENA coherently with the energy pathway throughout 2022 and is committed to an even broader engagement at COP27.

Throughout 2021, GSC has maintained close cooperation with IRENA, taking active part to the General Meeting, the Working Groups of the Coalition for Action, and the Public-Private Dialogue, and will participate in all the 2022 appointments. GSC also joined the International Solar Energy Society (ISES) Solar World Congress (SWC) 2021 to remark the resilience solar PV has shown during the pandemic despite the disruptive effects on day-to-day operations and supply chains, emerging at the end as one of the few bright spots in the global economy, and highlight what are the most crucial actions that policy makers need to endorse in order to accelerate solar growth.

GSC has contributed to the founding and coordination of two new global initiatives to broaden its scope and enhance its presence on the global stage around key emerging themes: the Global Alliance for Sustainable Energy and Worldwide Carbon Price, which both held launching events and webinars. GSC’s commitment in these initiatives will continue and strengthen in 2022, to promote sustainability across the entire renewable energy value chain and a level playing field in the global transition away from fossil fuels.

In 2021 GSC has also signed a Memorandum of Understanding with the Global Wind Energy Council to strengthen cooperation and join forces to promote faster development of the two main renewable energy sources at global level, which are set to make up 70% of electricity generation by 2050. The two global associations produced a joint study on capacity trajectories on path to net-zero by 2050, highlighting the policy actions required by world’s governments to step up ambition and achieve the international climate targets.

In fact, the study found that by 2030 there will be a 29% shortfall in the projected wind and solar capacity required to keep the world on course to limit global warming to 1.5˚C and sustain a pathway to carbon neutrality by 2050. The results of the study, together with key policy recommendations, were presented at COP26 in a joint event.

The new members of the Board of Directors

Listed alphabetically by last name of the Directors

The new members of the Executive Committee

“With the newly elected Board and Executive Committee, and the existing and new members, GSC is committed to further strengthen its task forces producing market intelligence and policy insights for our members. The Council will increase effort to disseminate the vast potential of solar energy in empowering people who are committed to climate action. International partnerships, key to the achievement of a truly sustainable energy transition, will continue to play a fundamental role in the strategic activity of the Council, consolidating the existing ones and initiating new innovation-driven partnerships”, said Gianni Chianetta, CEO of the Global Solar Council.

See the new Board of Directors