Breakthrough growth in renewables in South-East and Eastern Europe, the Caucasus and Central Asia must be accelerated to end fossil dependency and boost energy security. 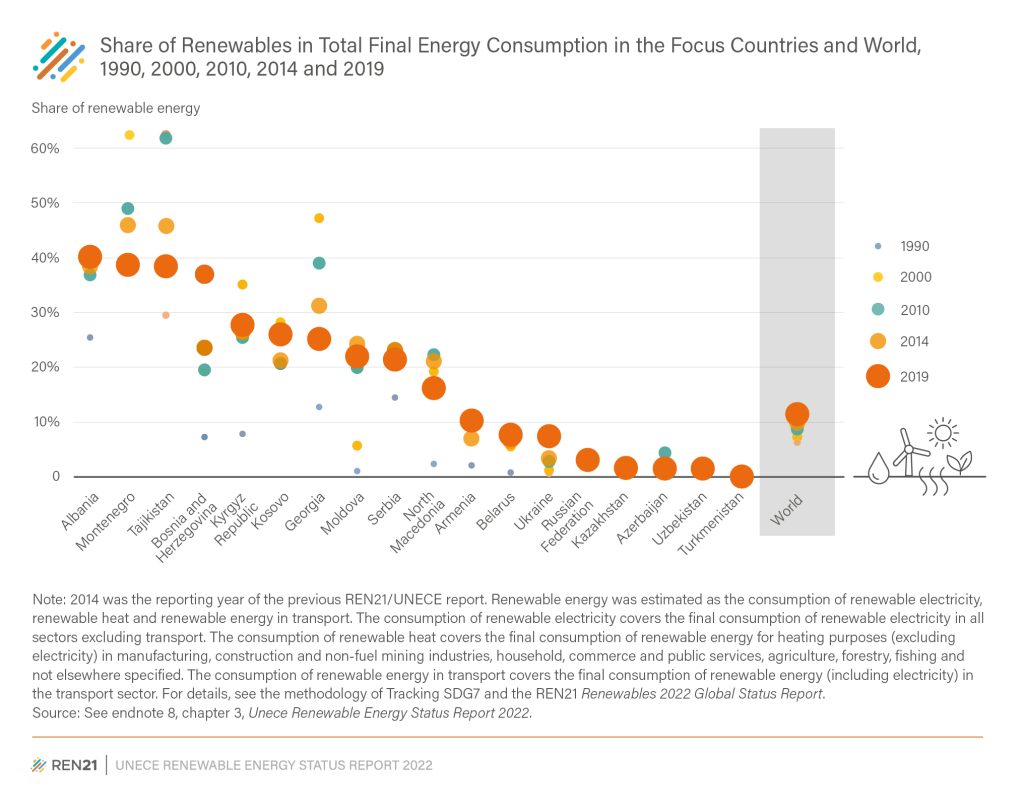 Between 2017 and 2021, 17 countries of South-East and Eastern Europe, the Caucasus, and Central Asia, plus Kosovo, saw an unprecedented growth in renewable power capacity. Over this period, they cumulatively added 21 gigawatts (GW) of capacity, for a total installed renewable power capacity of 106 GW. For the first time, this growth was driven mainly by solar photovoltaic (PV) (58%) and wind power (25%) additions. The region’s wind power capacity grew by more than a factor of 7 and solar PV capacity by more than a factor of 10 between 2017 and 2021.

Ukraine installed the most solar PV and wind power capacity during this period (8.3 GW), followed by Kazakhstan (3.7 GW) and the Russian Federation (3.5 GW). These three countries all ranked among the world’s top 30 countries for renewable energy investment in 2019, with Ukraine ranking 17th (USD 3.4 billion), the Russian Federation 20th (USD 2.3 billion) and Kazakhstan 28th (USD 0.8 billion).

Energy security at the forefront

Despite breakthrough progress in renewables, these focus countries continue to depend heavily on fossil fuel sources and rely on a limited number of energy exporters, especially the Russian Federation. According to the report, 13 of the countries are highly dependent on energy imports,

with 4 countries – Armenia, Belarus, Georgia, and Moldova – importing more than 70% of their total primary energy supply. Renewables could help countries diversify their energy supply and protect against fluctuating natural gas and oil prices.

Large subsidies for fossil fuels and low tariffs for fossil and nuclear based energy hinder rapid deployment of renewables across all sectors. Although the size of energy subsidies as a share of gross domestic product (GDP) has declined in all the focus countries, it was still significant in 2020, especially in Uzbekistan (6.6%), Turkmenistan (3.2%), Kazakhstan (2.6%) and Azerbaijan (2.4%).

“Renewable energy growth in the region through 2021 was driven mainly by favourable policies and by the falling costs of renewable energy technologies – but now, energy security is absolutely at the forefront. Moving away from fossil fuel has never been as vital for the region,” said Rana Adib, REN21 Executive Director.

“With the UN climate talks (COP27) only a few months away, countries and investors in the UNECE region must urgently redouble their commitments to renewables deployment to achieve global net zero targets and end fossil fuel dependency,” said UNECE Executive Secretary Olga Algayerova. “This action is also vital to help countries get on track to meet the UN Sustainable Development Goals and to speed the transition to resilient energy systems. Scaling up renewables investment is crucial to strengthen energy security and affordability in light of the energy and financial shocks related to the conflict in Ukraine.”

“The Russian invasion of Ukraine and its spillover effect on neighbouring countries are undermining renewable power generation in the short term. At the same time, it has shed new light on the benefits of a rapid energy transition and could bring a surge in renewable installations in the region,” said Adib.

The potential for renewables in the region remains untapped

Energy efficiency policies, especially for buildings, improved greatly across the region over the last five years. However, the energy intensity of all focus countries except Albania remained higher than in the European Union (EU-27) in 2019, with the highest rates in Turkmenistan and the Russian Federation.

The report documents significant progress in the adoption of policies and targets for renewable energy and energy efficiency, with 15 of the focus countries having established national renewable energy targets and 4 countries having set a target for net zero emissions or carbon neutrality. However, gaps remain in the adoption of policies and action plans, and implementation remains slow.

As a result, the combined public and private investment in renewables across the focus countries remains modest compared to global growth trends. In 2016, renewable energy investment in the region fell to USD 2.7 billion before returning to the 2013 level of USD 7.2 billion in 2018, representing around 2.2% of the global total[4]. In comparison, USD 56.5 billion was invested in renewables in the EU in 2018.

“To ensure a low-carbon future with stable energy costs, countries need to commit today to a renewables-based energy system. This can be achieved through policy implementation, long-term funding to grow domestic supply chains and stronger regional co-operation,” said Algayerova.

“Investment in renewable energy capacities as well as local and regional supply chains needs to be significantly increased in the region. This will not only create economic opportunities but also is crucial for building-up long-term energy security”, Adib added

Most of the focus countries import key technologies such as solar panels and collectors, wind turbines and efficient heat stoves. Investing in regional and domestic supply chains can create added value and boost economic growth. Distributed (decentralised) renewables, which remain largely untapped in the region, could help overcome energy poverty and foster economic growth. They can empower stakeholders (such as municipalities, communities and citizens), increase gender equality and strengthen resiliency to shocks such as natural disasters and conflicts.