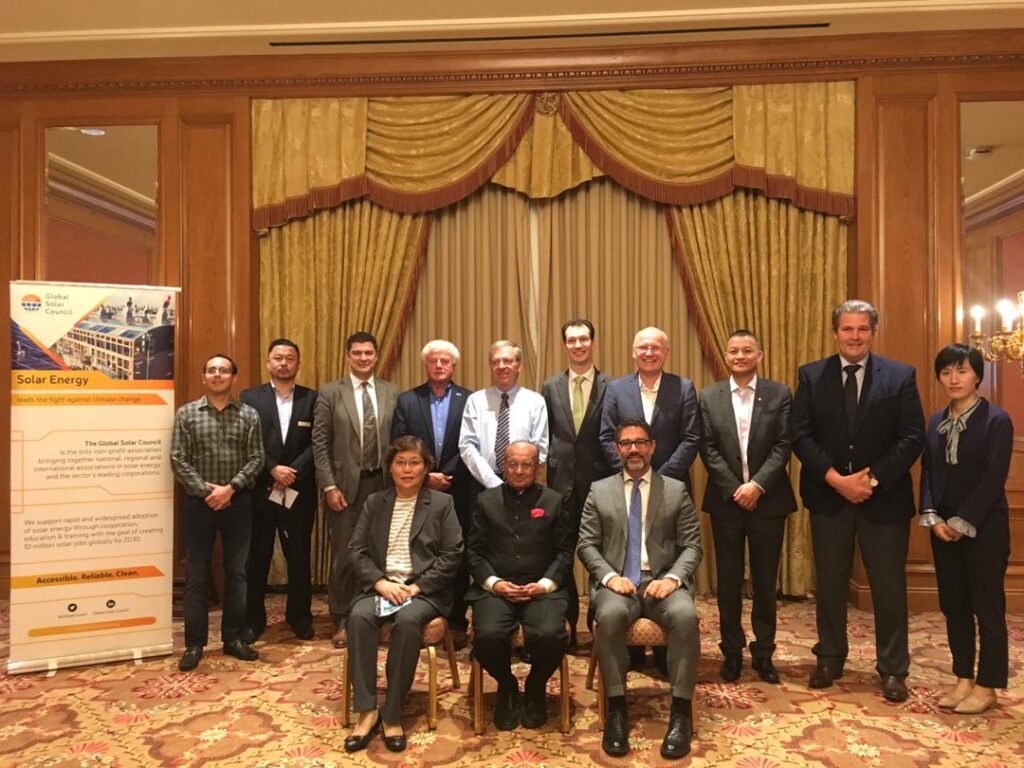 Solar will play an important role in meeting Paris climate goals as installation growth eclipses the industry’s historical record. Low-cost distributed energy systems and potential for residential and agricultural sectors will have an impact on poverty reduction and combatting inequality. Global Solar Council elects new board and officers.

Salt Lake City, USA, 30th September 2019 – The world solar market is poised for a new, dramatic phase of growth in which innovation in efficiency and lower costs will make solar technologies a major contributor to the Paris climate goals and help combat poverty and inequality, according to projections by the Global Solar Council.

The new phase of the solar market will dwarf the scale achieved so far in the industry’s 30-year history: compared with the 500 gigawatts of solar photovoltaic installed today, a new market boom will see more than 8,500 gigawatts (8.5 terawatts) installed by 2050, based on International Renewable Energy Agency (IRENA) forecasts, to meet the climate targets set out in Paris in 2015.

According to the Global Solar Council’s outlook – presented during Solar Power International as part of the North America Smart Energy Week – utility-scale projects will continue to dominate the industry but there will be an important role to play in the residential sector and for distributed as well as off-grid energy thanks to new, innovative ways to implement solar solutions. Research is underway to continue improvements in solar module efficiencies and identify new materials that will help extend the dramatic reductions in manufacturing and system costs.

“The way solar will spread, enabled by new technologies and innovation, will be as important as the headline growth numbers,” commented Pranav R Mehta, Chair of the Global Solar Council and Chairman of the National Solar Energy Federation of India. “Given the widespread recognition of the urgency of the need to decarbonize our economies, the prospect having a solar plant on every farm will be a gamechanger, affordable storage will be a gamechanger and mass deployment of micro and mini grids will transform the energy system.”

During the Salt Lake City event, the Global Solar Council held its AGM, which saw the election of new leadership as the body looks to deliver its mission of promoting the rapid and widespread adoption of solar energy through market development, partnerships and education. That follows the greater visibility, impressive partnerships with international organizations and financial consolidation achieved under Chair Mehta.

Gianni Chianetta of Italia Solare will be Chair for 2020 while José Donoso of Uniòn Española Fotovoltaica (UNEF) was elected as Chair for 2021. The new board discussed the GSC strategy of extending its focus beyond the climate crisis to questions of how solar energy will help tackle socio-economic issues like inequality and poverty.

“Representing the solar industry at a worldwide level with members spanning all the major markets and both developed and emerging economies, the Global Solar Council has an important role to play as solar moves from a minor player in the energy system to a mass phenomenon, and to do that we are ready to work with other actors as well,” continued Pranav R Mehta.

The Global Solar Council is the voice of the world’s solar energy industry, a non-profit body based in Washington D.C. representing national, regional and international associations as well as leading solar sector corporations. Founded at the 2015 Paris climate conference as a private-sector response to the climate emergency, the Global Solar Council brings together associations from both established and emerging markets that represent companies all along the solar supply chain.