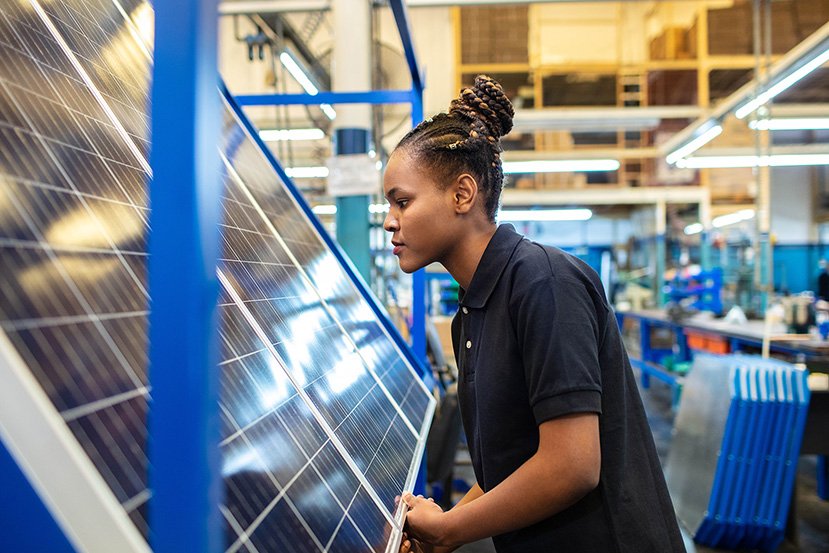 July 21, 2021 – Solar PV has enormous potential in Africa, which can boast 40-60% of total solar energy potential on Earth, and where a huge increase in power demand is forecast for coming years – and is already under way – due to economic and population growth.

The continent is expected to double its population by 2050, to almost 2.5 billion inhabitants. Most importantly, half of that population will be under 25, which raises the urgent question of how to enable that demographic shift to support decent work for all. To get a glimpse of the magnitude of the phenomenon, more than half of global population growth between now and mid-century is expected to occur in Africa, resulting in almost 1 in 4 people on the globe living in the sub-Saharan region in 2050. Those dynamics create an urgent need for coordinated dialogue and development of solar power in the region.

Sub-Saharan Africa was the focus of the second day of the Global Solar Council Virtual Forum: Powering a bright future with Solar PV, held in cooperation with SolarPower Europe and with the support of GET.invest. Featuring 38 distinguished and expert speakers, the event welcomed over 400 participants from solar business leaders to industry associations and from government to financial institutions, who joined from every continent. The second day welcomed members of the GSC Africa Task Force as well as business leaders and international institutions engaged in the region.

Solar PV has an essential role in meeting power and labor needs, yet “Africa’s share is only 1.48% of global installed capacity with 10.5GW, which is too low for a continent having most of the global solar energy potential,” said Nopenyo Dabla, Programme Officer Sub-Saharan Africa at the International Renewable Energy Agency (IRENA). “Bringing together investors and developers through matchmaking is a core element to make projects bankable”, he added, pointing in particular to grid extension but also mini grids and solar home systems as the key areas needing investment.

According to the International Energy Agency (IEA), 75% of the 770 million people still living without access to electricity in 2019 were in sub-Saharan Africa. As highlighted by Arthouros Zervos, President of REN21, “starting from scratch” also creates opportunities, because those living without electricity are more open to change than those that take it for granted. “Africa – unlike Asia – has avoided a coal-reliant electricity grid, so we see few new coal plants being built in the sub-Saharan region, with very high PPA generation (even PPA over-investment in some countries) and a leading role in policy framework for mini-grids globally,” Zervos remarked.

“Solar PV’s potential in Africa is immense,” said Walburga Hemetsberger, CEO of SolarPower Europe. “The African continent holds most of the solar energy potential on the planet, which is being realized increasingly every year. The GSC Virtual Forum focused on how local stakeholders from the sub-Saharan African region along with international solution providers, industry associations and institutions can unlock this enormous potential by working together to foster new projects and investments in what will become a booming solar market.”

Women have a fundamental role to play in sustainable development and the clean energy transition, perhaps even more in Africa, a world leader in female entrepreneurship with 27% of women engaged in early-stage entrepreneurial activity. “Women make up only 32% of the renewable energy workforce,” said Bertha Dlamini, President of African Women in Electricity and Power. “Universal access to energy is a prerequisite for the achievement of the SDGs. Solar PV’s value chain presents unique opportunities for inclusive, sustainable economic growth and producing employment and decent jobs for all. African women represent a vast reservoir of entrepreneurial potential, talent and resilience that can ignite industrial activity and anchor a path for sustainable economic recovery post COVID-19.” Ensuring equitable participation of women, youth, and people living with disabilities is crucial to create sustainable solar businesses.

Concerning remuneration schemes, sub-Saharan Africa can count on some good examples regarding net metering and feed-in-tariffs with a few countries having mature regulation and clear framework for auctions. As explained by the ECOWAS Centre for Renewable Energy and Energy Efficiency (ECREEE), others need to follow and update remuneration schemes and outdated legislation to fully exploit solar PV potential. “They are no magic words, but only the right regulations and decisions will lead us to a magical and successful solar deployment,” commented Hadyr Koumakpai, GM Africa at JA Solar. “Auctions with bankable PPAs are the most effective schemes for solar and even better if accompanied by international institutions offering capacity building,” remarked Silvia Piana, Head of Regulatory Affairs Africa, Asia and Oceania at Enel Green Power. “Overall, the main need is for risk mitigation measures in order to attract investment.”

Even if extended, grids alone cannot meet rising energy demand: the off-grid sector is fundamental as well. As highlighted by the Alliance for Rural Electrification (ARE) and GOGLA – The Voice of the Off-Grid Solar Energy Industry, distributed renewables and off-grid solar PV can generate income through increased productivity and local job creation; reduce dependency on expensive, unreliable and polluting fuels, translating to community savings and better health; enable essential services and the provision of basic goods; increase autonomy and resilience to climate change (e.g. modern irrigation and desalination systems); allow for a better distribution of resources within the community and reduce inequalities. However, off-grid solar products are still not affordable for many, and public support is strongly needed.

Ilham Talab, Technical Advisor at GET.invest, stated: “Through the work we do at GET.invest, we see first-hand how solar companies in sub-Saharan Africa are innovating across the value chain to serve customers, not only with light but more and more with additional services that create value in the toughest environments. We are committed to continue contributing to this, on behalf of our donors – the European Union, Germany, Sweden, the Netherlands, and Austria –  via our advisory and coaching support to companies and projects, to help them scale up and access finance.”

As they continue to advocate for enabling policies, higher subsidies in the off-grid sector and improved standards for solar equipment, African industry associations confirmed encouraging trends in countries like Zimbabwe, Uganda and Tanzania for C&I projects, net metering, rooftop solar, solar pumping for agriculture, mini-grids, solar home systems in rural areas, and contributions to off-grid solar from tourism and mining. With higher energy needs and financial capabilities for people, batteries are also increasingly looked at to be coupled with solar PV and enable progress in agriculture, cooking and cooling, while generating income for households and entrepreneurs. African industry associations are also engaged in capacity building to address local companies’ need for accessing technical knowledge.

Representatives from the national industry associations of Ghana, Mozambique, Nigeria, Tanzania, Uganda, Zambia, and Zimbabwe all agree that Africa has a great opportunity to turn around its economies post COVID-19 using renewable energy and particularly solar PV given the improvements in technologies and reduction in costs, and that Solar PV is the gateway to the SDGs, with potential to bring about huge socioeconomic impacts, in terms of employment, sustainable livelihoods, education and gender equality.

Gianni Chianetta, CEO of the Global Solar Council, closed the event, saying: “Aided by enabling policies, solar PV can power sustainable economic growth in sub-Saharan Africa, bring inclusive socio-economic benefits, create decent and qualified employment reducing the gender gap, inspire the next generation of entrepreneurs and leaders. The region could go as far as becoming a global leader in the solar sector, setting new standards for its development and regulation. An event like the GSC Virtual Forum, thanks to the work of the GSC Africa Task Force, is crucial to get developers, investors, climate scientists and civil society around the same table to accelerate the energy transition.”