Global Solar Council at the COP26 Energy Day: solar PV can empower communities and change lives while providing a vital contribution to decarbonization and climate targets 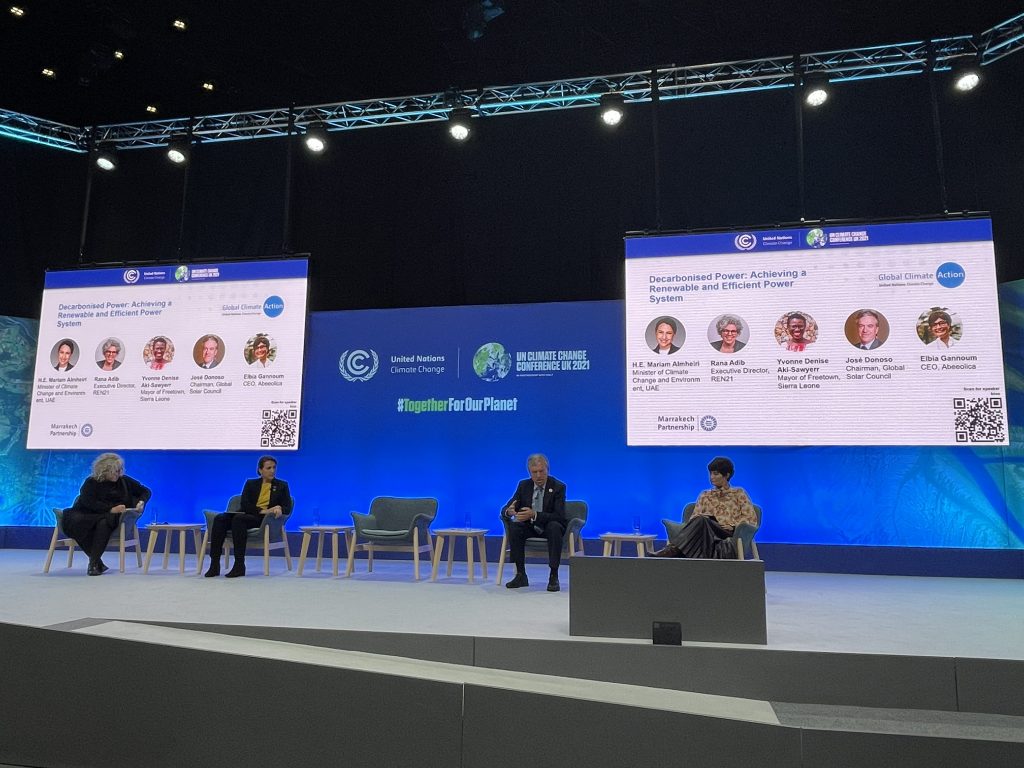 GSC Chairman José Donoso at the Marrakech Partnership Energy Action Event: “Private funds are ready to flow in the market, but they need legal certainty and clearer regulatory frameworks”

“Solar PV is not only cheap and clean, but it’s also very versatile. It can bring electricity where conventional means have failed, it can change peoples’ lives, and this makes us proud,” Global Solar Council Chairman José Donoso told the Energy Action Event organized by the Marrakech Partnership for Global Climate Action (MPGCA) at the COP26 climate summit in Glasgow, held in cooperation with IRENA, The Climate Group, GWEC, ICC, IEA, REN21, SEforAll, UNEP and WBCSD.

Addressing renewable energy industry and private sector leaders, ministers, politicians and climate scientists from around the world, the GSC chairman recalled that when the COP climate summits started back in 1995, solar PV technology was probably the most expensive way to produce electricity, and the entire market amounted to no more than 3-4 megawatts (MW) a year. Now, solar PV not only is the market leader among the clean sources of power production, but also the cheapest way to produce electricity. And last year, 120 GW of PV capacity was installed. An impressive path, comparable to very few other technologies in history.

Solar PV is also the most versatile technology at our disposal for the renewable energy transition thanks to its ability to empower communities and change peoples’ lives. It offers unique solutions for the electrification of countries where conventional sources have failed to bring power and development to hundreds of millions of people.

Its flexibility, applied to urban areas and integrated in smart grids, transport and telecommunications, can pave the way for the creation of smart cities. Production and consumption of electricity are going to change dramatically and “solar PV is the driver of this process from the energy point of view,” Donoso said.

But we need to improve on solar PV’s current installation rate because the technology faces significant barriers in many countries. If we want to accelerate the energy transition, solar PV needs to grow faster than currently. The International Energy Agency (IEA) and IRENA set a target for 5 terawatts (TW) of solar PV by 2030 to remain aligned with a 1.5C increase in temperatures, but the GSC has estimated that even if the industry maintains its exceptional current growth, we will fall short of the 2030 target by 22%.

Permitting bottlenecks are still slowing solar PV’s pace, even in countries characterized by strong political willingness. The technology is mature and could count on extensive liquidity in financial markets. “There are public and private funds ready to invest, but they need legal certainty, clear and fair regulatory frameworks to avoid administrative delays. There is the need to train more civil servants qualified in aspects of renewable energy to support the administrations.” remarked Donoso.

Every one-year delay in the construction of a solar plant means one more year of fossil fuels, one more year of CO2 emissions, one more year of high, volatile electricity prices. “In the transition and in the phase out of fossil fuel subsidies, we have to recognise that countries start from very different situations and so we need to adapt our efforts as we keep decarbonizing the global economy,” the GSC chairman explained. With political willingness and clear regulatory frameworks, solar PV can grow much faster than the current levels and provide a vital contribution for the decarbonization and climate targets.