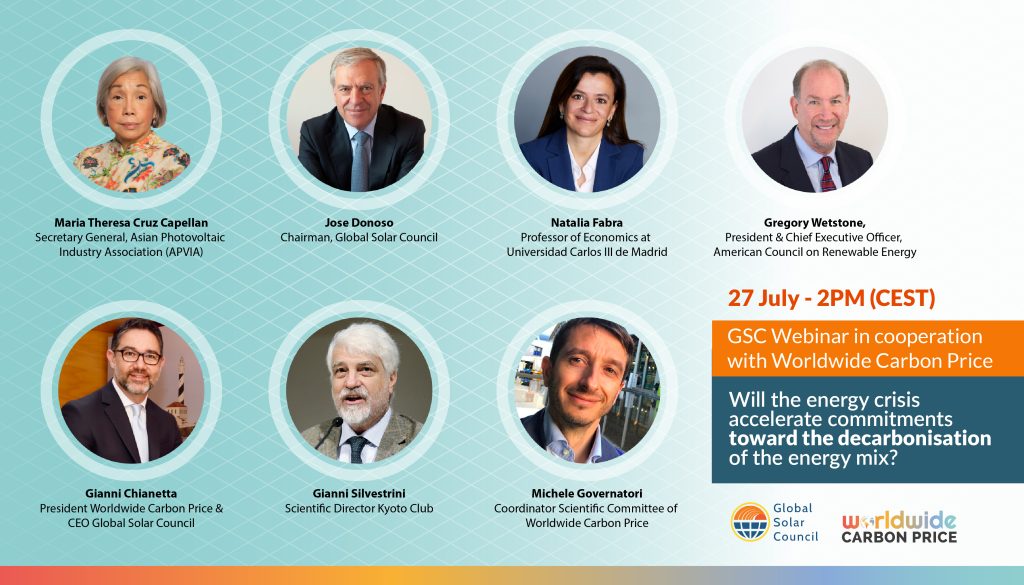 The right answer to the current energy and geopolitical crisis is to accelerate the energy transition, said José Donoso, GSC President, opening the GSC webinar “Will the energy crisis accelerate commitments toward the decarbonisation of the energy mix?” held in cooperation with Worldwide Carbon Price (WCP) on July the 27th.

Replacing fossil fuels with renewable energy sources is not only key to set the world on track to net-zero by 2050 and limit the worst effects of climate change, but also to achieve international energy security as the invasion of Ukraine by Russia and the pressure wielded on Europe with its gas supplies have clearly highlighted. However, continued Donoso, “a successful transition requires structural answers to the challenges countries around the world are facing and not illogical and uncoherent measures like the inclusion of natural gas and nuclear power in the EU green taxonomy.”

One of the urgent actions needed is to ensure a level playing field for renewables, but fossil fuels keep being incentivized vastly across the world economies. Thus, as energy prices surge due to natural gas and oil volatility, governments employ public resources for short-term mitigation of consumers’ bills. Governments, especially in countries which are heavily dependent on Russian natural gas imports, are also looking at alternative sources to stock up in sight of winter and are also planning on new infrastructure such as regasificators and pipelines.

“These projects”, commented Michele Governatori, Coordinator of the Scientific Committee of WCP, “will not be ready for the upcoming winter, and if we increase renewable electricity capacity to get on track to net-zero by 2050, the risk is to create stranded assets that will hardly be repaid. An issue that is relevant for all Europe.”

A medium-to-long-term transition to renewables can lead countries to energy security while lowering and stabilizing energy prices. “Even though decisive carbon pricing policies might not be felt as much necessary right now given the current market shock – Governatori explained – future scenarios to support a global energy transition should entail carbon pricing instruments, which pose an adequate and programmable price signal to the energy market promoting smooth and safe decarbonization.”

In fact, “the continued price increase of natural gas will basically act as a carbon tax in the medium run”, said Gianni Silvestrini, Scientific Director Kyoto Club, who is optimistic some of the short-term effects of the current crisis are positive, such as the increase in number of people installing renewable systems to lower their energy bills, higher penetration of energy efficient instruments like heat pumps, discussions in countries like Germany and Italy to increase renewable electricity generation significantly. Indeed, gas demand to 2025 is now expected to be less than half what previously anticipated by the International Energy Agency (IEA).

The IEA has also proposed measures the EU could implement this year to bring down gas imports from Russia by over one-third, factoring in energy storage and actions for flexibility on the demand side in its strategy. “These are good results but we should go much faster”, said Silvestrini.

Achieving a level playing field for renewables is a challenge also in the US – remarked Gregory Wetstone, President & CEO of the American Council on Renewable Energy – where, despite another good year for solar, incentives for clean energy technologies are increasingly fading away whereas fossil fuels are still largely supported.

Amidst rising inflation, supply chain concerns and trade policy issues that are expected to slow the pace of the transition – said Wetstone – a legislation in favor of renewables is much needed. “The need is clear and the technology is there, so what we are lacking is global policy drive and there is really no excuse for us to not move forward”, he concluded.

The new $370 billion bill recently presented as part of the Inflation Reduction Act of 2022 is certainly a good news as it would represent the highest climate funding ever seen in the US, but it still needs to pass the full Senate and House of Representatives. The plan would mean much needed investments in renewables, energy efficiency and green technologies, and ensure 40% reduction of CO2 emissions by 2030 compared with 2005.

The social backlash from spiking energy prices and general inflation is going to be large, explained Natalia Fabra, Professor of Economics at Universidad Carlos III de Madrid, highlighting the risks of relying solely on a short term energy market.

“Demand for electricity varies quickly so we need a liquid market that adjusts in real time, but this doesn’t mean we have to remunerate every power source on short term basis”, said Fabra, questioning a technology-neutral approach. However, she concluded, “stable long term markets are not going to arise spontaneously, we need active regulators and good procurement rules and we need to understand that the counterparty in such long term renewables contracts is all of us, because it’s all of us that will benefit from them.”

“The best solution is a combination of different technologies such as energy storage – which at large-scale is already cheaper than gas plants –, green hydrogen, interconnectors, innovative demand response systems. Governments are too often focused on short term actions, while raising ambition for medium-to-long term decarbonization and employ the right market mechanisms can provide security for investors and consumers”, said Gianni Chianetta, CEO of GSC, upon closing the webinar.