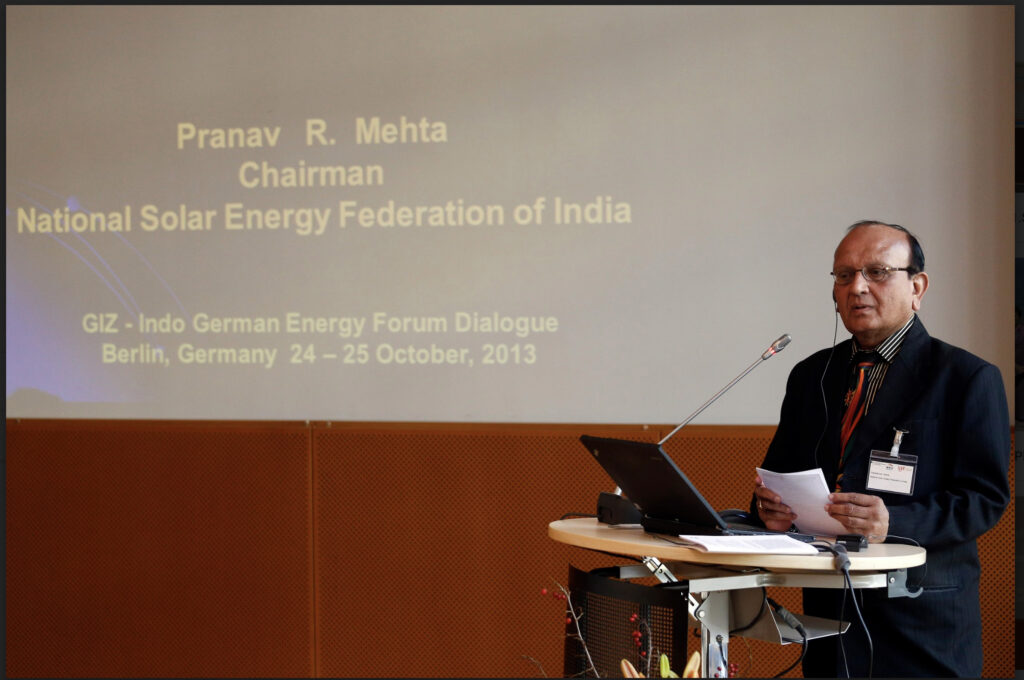 From a metallurgical engineer to India’s CNG warrior and later, the country’s Solar Man, Pranav Mehta’s story reads like a series of ‘renewable’ steps. In the first of pv magazine India’s new personality interview series, editor Preeti Verma Lal talks to the Global Solar Council’s new head. He discusses what’s on the to-do list and the strategies needed to succeed.

“The world will not survive if our dependency on fossil fuels is not curtailed.”

Born in a Nagar (literally: city dweller) family in the Indian state of Gujarat, Pranav Mehta grew up to study metallurgy. While working for Tata Steel, he pioneered the use of natural gas for steel making. That move won him the prestigious National Metallurgist Award in November 1990 and sparked his dream to create a cleaner, better world.

Back then, solar energy was not his calling; rather he was focused on compressed natural gas (CNG). As advisor to the Gujarat State Petroleum Corporation, he spearheaded the state – and later India’s – CNG revolution.

However, during a 2006 conference in the United States, Mehta became aware of India’s large, as of yet untapped, solar energy potential. Back home, his newly found solar fervor did not fade, and he spent two years relentlessly working to persuade people that it was time to set the scene. Finally, his hard work paid off and by 2008, 50 MW had been instaled at various sites across the country.

From no installed capacity in 2007, to 28 GW today, Mehta has played a pivotal part in steering India’s renewable energy dream. On January 1 2019, he became the first Indian to head the Global Solar Council (GSC), an international coalition of 30 countries and several corporate houses, which aims to lead the energy transition and enhance energy security through solar PV.

Last week, GSC’s first meeting under his leadership was held on the sidelines of the World Future Energy Summit (WFES) in Abu Dhabi. Talking to pv magazine India after the meeting, Pranav Mehta discussed the council’s new to-do list and the strategies needed to achieve it.

pv magazine: What was discussed at GSC’s Abu Dhabi meet?

Pranav Mehta: Call it new headwinds: GSC will move away from gigantic targets and practice ‘action & spread’. With 1.2 billion people still without access to electricity, GSC will strive for large deployment of micro and mini grids, and rooftop installations to promote decentralised energy generation, early deployment of already developed high-efficiency technology from laboratory to the field, formulate programs to promote and develop financial mechanisms to reduce cost of capital and ultimately energy cost, and intensify R&D efforts among ISA and IRENA countries.

What is your focus area?

My heart reaches out to the energy have-nots and GSC is now emphasising on the spread of solar in uncovered areas of Africa, Latin America, climatically threatened small islands, and some parts of India, Bangladesh, to name a few.

What is your primary aim?

To achieve one trillion mini grids, one trillion solar homes, solar agricultural pumps, and 10 million jobs by 2030. The idea of a Solar Home stems from the United Nations’ September 2015 declaration of Sustainable Development Goals (SDGs), which is pegged around better living for all. A Solar Home should have enough energy for two fans, four tubelights, one plug point for a mobile charger, and one for a television.

One trillion mini-grids and 10 million jobs is a tall order. How will this be achieved?

Partnership is the answer. For dissemination of tech, experience, knowledge, we will – together with and in consultation with theInternational Solar Alliance (ISA), International Renewable Energy Association (IRENA), governments and other organisations – achieve this. But there cannot be a one-size fits-all policy. For Africa, the India-Africa Youth Forum for Energy will be the main conduit. We will pick 25 students (five each from five African countries) and train/intern them in different countries/companies. At the end of one year, they will return to their countries to become GSC solar-knowledge agents and entrepreneurs.

GSC directors from Brazil and Mexico will spearhead the solar spread in LatAm, while for the climatically challenged smaller islands, we are partnering with Greening the Islands (GTI), a not-for-profit group that aims to accelerate the sustainability and self-sufficiency of islands and remote locations. Interestingly, Gianni Chianetta, GSC’s new Chairman-elect is heading GTI.

The need of the hour is to develop, implement and promote internationally-recognised solar codes and standard. How is GSC taking this forward?

A lot needs to be done in this sphere. Quality is a huge question mark. There are international quality standards but not all of it is adhered to. To begin with, we are creating awareness as well urging developers to buy only from Tier 1 companies. We are also in the process of formulating definite solar standards.

What is driving India’s solar dream?

India is placed amongst the Top 5 solar players in the world and is the world’s third largest solar market. This growth has been possible, because of the government’s enabling policies, the role of proactive bureaucracy, and the significant contribution of solar industry players in terms of capital investment, technology deployment, employment generation, skill development, innovative financing and above all, achieving cost reduction.

With global warming looming over the world, what does the future hold?

The world will not survive if our dependency on fossil fuels is not curtailed. At GSC, we are looking at 2030 as the first goalpost. By 2050, I am hopeful the entire world will run on renewable energy. I envisage a day when each home will have a refrigerator-like box, which will provide/store all energy needs. Sounds impossible at the moment, but it is actually doable. Hopefully, sooner than we think.