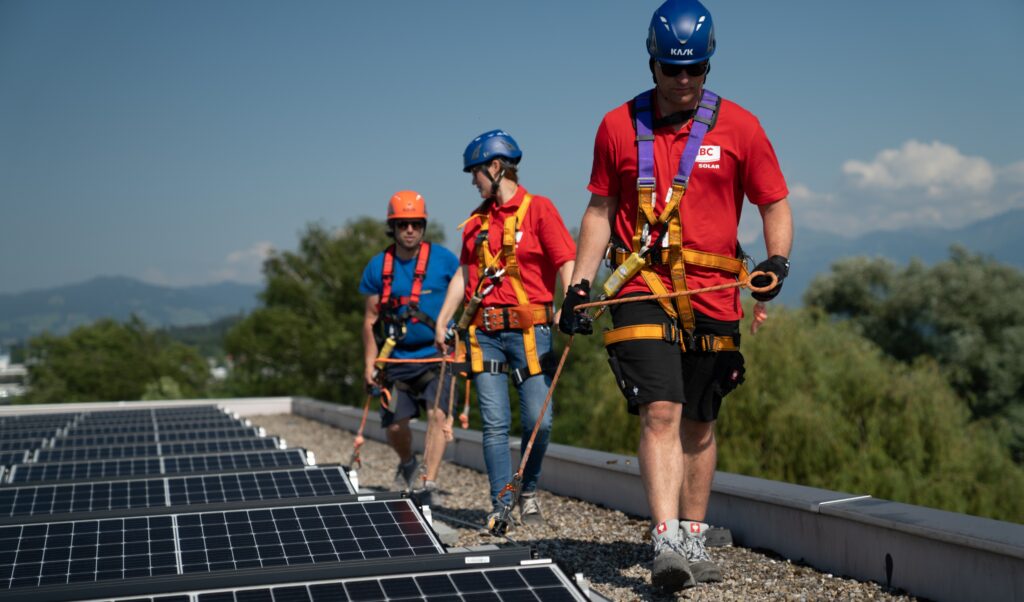 In the middle of March, PV and energy storage system provider IBC SOLAR and Preising GmbH announced their cooperative effort and introduced the IBC AeroFix Latch fall protection device – specifically developed for maintenance and servicing of PV systems on flat roofs in areas where there is a risk of falling. The system has meanwhile been put into practice in Switzerland.

Building owner Müller Verwaltungs AG and factory operator Marty Korrosionsschutz AG from the Swiss town of Rapperswil-Jona became the first group of companies to decide for an IBC SOLAR photovoltaic system with integrated fall protection. “We want to reduce our electricity expenses. Having our own photovoltaic system was the best option in this case,” explains Urban Müller, managing of the two companies. “In the process, we plan to use as much self-produced green energy as possible, distributed over the course of the day – ideally, 100 percent of it. Everything generated beyond that, we feed into the grid.”

Said and done. Specifically tailored to the company’s needs, IBC SOLAR planned the system with the help of its PV manager. This guarantees a perfectly coordinated system of components. The company had a total of 416 IBC Monosol 320 VL5-HC modules installed on a generator area of 691 qm². The system’s output amounts to 133 kWp and it generates approx. 110,500 kilowatt hours per year. Together with IBC SOLAR AG Preferred Premium Partner ch-Solar, the company opted for the aerodynamic IBC AeroFix installation system as a substructure. As such, the ideal conditions for installing the AeroFix Latch fall protection device had been established.

“The AeroFix Latch fall protection device makes photovoltaic system maintenance and repair simple and cost-effective” says Stefan Helbling, project manager of ch-Solar. One of the biggest advantages is that the AeroFix system combined with the fall protection device enables construction right up to the edge of the roof. This enabled the system belonging to MARTY Korrosionsschutz AG to be installed at a distance of 70 centimetres from the roof edge. Thanks to this, nearly 25 kWp more output was installed, which is equivalent to two rows of modules and a performance increase of 20%. “In addition to reducing the costs of maintenance, this is naturally a huge advantage for us because we can use more area of the roof. That is very efficient,” Urban Müller adds.

A central feature of the AeroFix Latch fall protection device is its direct connection to the module array. In combination with suitable personal protective equipment against falls (PPEAF), this ensures maximum freedom of movement around the entire PV system combined. This makes it possible for installers to enter areas with fall hazards without additional and complicated hooking and unhooking. What’s more, the entire system can secure up to 3 people at the same time.

Regardless of the arrangement of the solar modules, the AeroFix Latch fall protection device can be used on module fields with at least 20 overlapping solar modules. Integrating it into the IBC AeroFix mounting system offers a number of advantages: First of all, no additional space and no additional construction measures are required for the fall protection device on the roof. There is therefore no impact on the roof tightness and no undesired shading occurs. This not only saves money, but allows maximum use of the roof area, since it can be laid right up to the edge of the roof. Secondly, no further costs are incurred for scaffolding or additional safety devices for the maintenance of PV systems.

The fall protection system certified by DEKRA was tested in a dynamic drop test according to standard specifications. The result: the AeroFix Latch fall protection device is able to withstand a fall weight of three people. Successfully EU type-tested, it also meets all requirements of the European PSA regulation (EU) 2016/425. As such, no additional individual tests are necessary. The AeroFix Latch fall protection device can only be used in combination with the IBC AeroFix installation system. Would you like to find out more? Just click here: https://www.ibc-solar.ch/installateure/aerofix-latch-advertorial-de