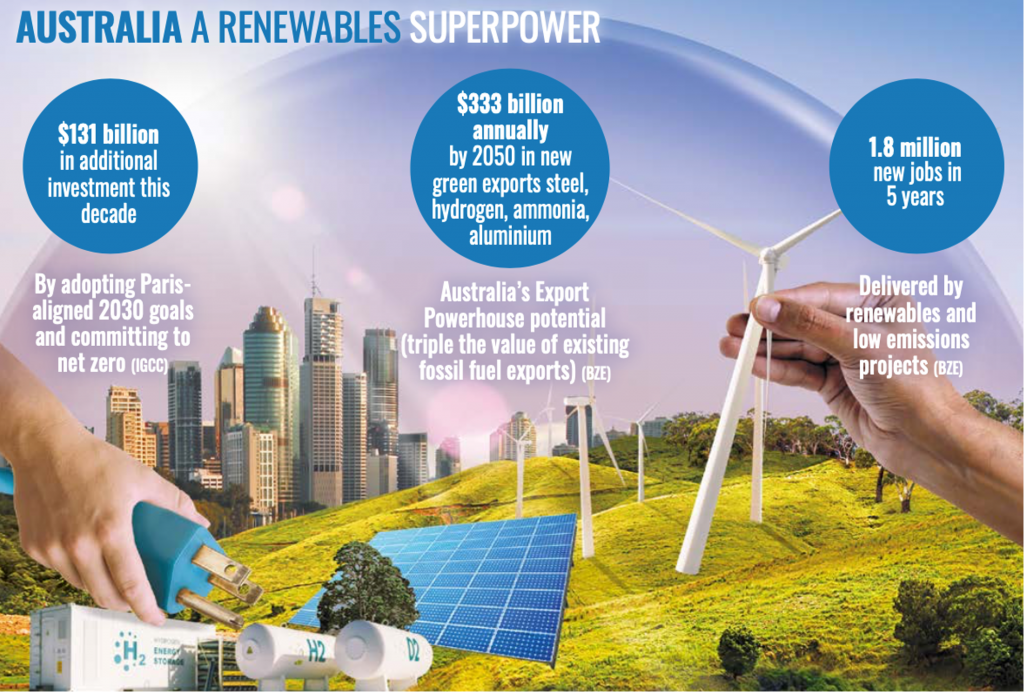 Despite what could be – as depicted in the graphic above – Australia remains locked in the dark ages with its steadfast support for carbon emitting, climate wrecking oil and gas. This was made quite evident at COP26 where, to our great shame, Australia earned itself the title of “Colossal Fossil” from Climate Action Network International.

The group declared Australia as the worst performer of all countries during the two week conference where we picked up five daily ‘fossil of the day’ awards on the back of weak or absent climate policies, plans to expand oil and gas industries, and promotion of fossil fuel giant Santos at Australia’s official pavilion. Crazy and conflicting by any account.

At the conference Australia declared emissions would fall 35 percent by 2030 which while exceeding an earlier goal of 26 to 28 percent still remains well below other industrialised nations.

Australia not only failed to strengthen its 2030 target for reducing emissions, but also failed to join international efforts to curb global emissions of methane 30 percent by 2030, refused to announce firm plans to transition away from its deep investment in fossil fuel production, and neglected to join the agreement to end deforestation by 2030.

The latest Climate Change Performance Index ranked Australia last out of 64 countries for its climate policies.

The Smart Energy Council has long been frustrated by Australia’s obsession with fossil fuels.

As put by chief executive John Grimes: “Since 2013 the federal coalition government has done everything it can to protect coal, massively expand fossil gas, and to roll back and stop the expansion of smart energy.

“Net zero? Their heart is not in it. Their ‘plan’ has no legislation, no mandate, and no policy to make it real. It is simply a talking point to hoodwink the public and get the coalition government three more years in power.

“Australia can and should be a global renewable energy superpower. We need to electrify everything, in our homes and businesses, on the road and in heavy industry, and then power it all with cheap zero-carbon renewable energy.

“We should be harnessing our fantastic Aussie sunshine and wind to export to the world, attracting global investment and growing Australian industry and jobs. Instead we are holding the world back, an outlier, a global climate pariah.”

Just days before the conclusion of COP 26 Australia’s rooftop solar generation was reported as setting new output records in every Australian state over the past month. The number of

rooftop systems across the country has now reached more than three million. (Australia’s population stands at around 26 million, with about 16 million dwellings.)

The Australian Energy Market Operator anticipates records to be broken through the upcoming summer months.

The share of renewables (wind, solar and hydro) at one point in Australia’s main grid, the National Electricity Market, struck more than 62.2 per cent, twice as much as the average contribution, and this achievement highlighted the potential that lies ahead on a more permanent basis.

Environmental groups hailed this achievement and the corresponding decline in coal fired generation which struck a record low of 36.6 per cent in the above time slot.

Although Federal government forecasts project renewable energy by 2030 will form around 70 per cent share of the main electricity grid; the push for and success of renewables is driven by State governments and corporations with clean technology targets and plans.

This is most evident in Australia’s most populous state of New South Wales which recently declared Australia’s first ever Renewable Energy Zone (REZ) was proceeding.

“NSW is securing our economic and environmental prosperity for decades and driving the nation’s action on climate change,” the State Energy Minister Matt Kean said, adding that business confidence is NSW is boosted by the states’ targets and plans that are backed by legislation designed to halve emissions by 2030 and achieve net zero by 2050.

Once complete the REZ in the state’s Central West will provide 3,000MW (3GW) of cheap, reliable electricity and drive $5.2 billion in private investment into the region by 2030. It will also help drought-proof traditional farming communities.

Four more REZs are on the cards for NSW with a view to the closure of the ageing fleet of coal fired power stations; another REZ received a colossal 34GW of project proposals, far outstripping the 8GW capacity earmarked for the zone. Again, emphasising investor confidence on the back of states’ targets and plans underpinned by legislation designed to halve emissions by 2030 and achieve net zero by 2050.

The positive power of plans, targets and legislation! If only the federal government – ruling over a nation that lurches from one climate induced catastrophe to another – had the fortitude and wisdom to extract itself from the grip of its fossil fuel benefactors.

The two conference streams over the day include several hot topics:

Electrify Everything: An Innoculation for Climate Change

Driving The Future Rollout of Electric Vehicles and Renewable Integration In Australia; Power Company of The Future/EVs; Smart Energy in a Post 2025 Energy Market; Automated EV Charging; Integrating EVs Into The Grid: A National Asset; Electric Vehicles: Transforming The Market.

The Smart Energy Council welcomes participants from across the globe to this interesting and informative Virtual Conference.

For more information and to register visit