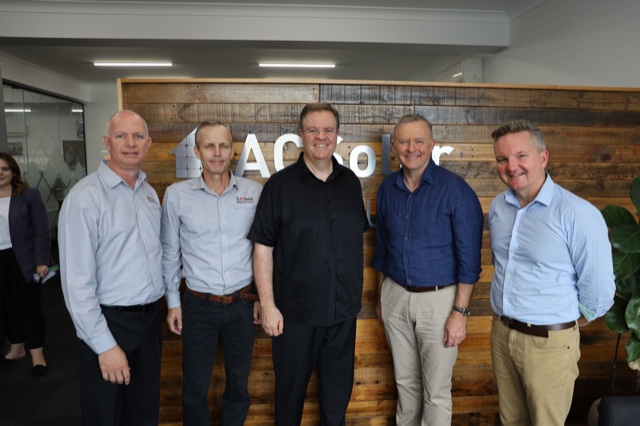 Australia may be dubbed the “land of plenty” yet it has no national energy policy or emissions reductions targets, no renewable energy targets, no climate policy and no Electric Vehicle strategy. It’s not a great scorecard for a land blessed with abundant solar and wind resources and all the necessary technology to harness clean energy.

Despite the Code Red warning delivered in the latest IPCC report, the conservative federal government is stepping up its comprehensive pro-coal, anti-solar agenda with

• A $7 billion ‘CoalKeeper’ subsidy that will allow unprofitable, ageing, polluting coal-fired stations to operate well beyond their lifespan

• Illegal legislative changes to the Australian Renewable Energy Agency Act that will force the renewable energy agency to fund fossil fuel projects, and

• A new solar tax that will slug Australian families to export their solar power to the energy grid.

Chief executive of the Smart Energy Council (SEC) John Grimes describes these as the worst possible policies at the worst possible time, stating “the world is literally burning and the federal Government is fuelling the fire and proposing a comprehensive pro-coal, anti-solar agenda.

The SEC is urging the federal Energy Minister to develop an energy and climate change policy for the 21st Century prior to the critical COP26 climate change meeting in November but efforts are being met with stubborn resistance.

Further, despite the government’s spurious claims that it is “leading the world in achieving climate targets and transitioning to renewable energy”, emissions continue to rise, while productivity and decarbonisation rankings fall.

The Australia Institute’s report Back of the Pack breakdown reveals:

• Despite a growing population and good economic growth, in 2019 Australia ranked second last on energy emissions per capita and per GDP, behind the USA and Russia respectively.

The disconnect between the paths and policies of the conservative federal government and (predominantly Labour governed) States continues, with State governments driving ambitious plans and strategies underpinned by 50 per cent renewables targets by 2030.

The Smart Energy Council recently staged Virtual Energy Summits in two key states whose progressive Energy Ministers and leading industrialists showcased the fundamental shift taking shape over vast landscapes that will deliver multi-GW of renewable energy and tens of billions of dollars in investment and business opportunities. The scale of projects in the pipelines is a ringing endorsement for climate action.

Significantly too, the Australian Energy Market Operator has reinforced the need for Australia’s main grid to be able to handle 100 per cent renewables by 2025. AEMO’s report contains planning scenarios including net zero by 2050 and development of a hydrogen industry superpower status. This blueprint echoes stakeholder calls for rapid decarbonisation of the energy sector and pathways to net-zero emissions.

Australia’s largest ever climate poll revealed voters in all the nation’s 151 federal electorates believe the federal government should be doing more to tackle climate change. The YouGov poll conducted for the Australian Conservation Foundation found not one electorate with majority support for government’s new gas and coal-fired power. Two thirds of the 15,000 surveyed also felt the conservative federal government should be doing more to address climate change, and, indeed, conserve life on land.

Which brings us to the Smart Energy Council’s largest event to date:

SEC is presenting this vital RACE TO ZERO GLOBAL SUMMIT in the lead-up to November’s COP26.

Over two days world-leading decision makers and activists will spell out the crucial role of renewable energy in delivering a low carbon economy to rein in global warming.

Among the high-profile speakers:

Our Global Summit of last year attracted over 6,600 delegates from across the world and we are aiming to grow that to more than 10,000 delegates. All with a common interest in climate action by dialling up smart renewable energy and systems that deliver a decarbonised economy.

Visit www.smartenergy.org.au for more details and to register.

Those interested in supporting the event can contact Alistair McGrath-Kerr of the Smart Energy Council at alistair@smartenergy.org.au or call +613 499 345 013

In other news from Australia, polluting oil and gas giant Chevron has failed to capture the greenhouse gas emissions it vowed at its Gorgon oil and gas project which is the world’s largest CCS project and the leading test case for the technology. Gorgon was attempting to capture four million tonnes of carbon dioxide annually, or 80 per cent of the carbon extracted from its reservoir gas, yet recorded capture of just 30 per cent. This is described as a shocking failure of one of the world’s largest engineering projects, already $60 million of taxpayer’s money has been spent on the A$3.1 billion CCS project.

In brighter news, Western Green Energy Hub is destined to become the world’s biggest renewable energy hub. Costing $100b and with 50GW* wind and solar capacity it will generate 3.5m tonnes of green hydrogen or 20m tonnes of green ammonia each year. the proposal by InterContinental Energy, CWP Global and Mirning Green Energy Limited. *Current generation capacity of coal, gas and renewables plants in the NEM sits at 54GW.