Solar Energy and its Countless Benefits for the Power Grid 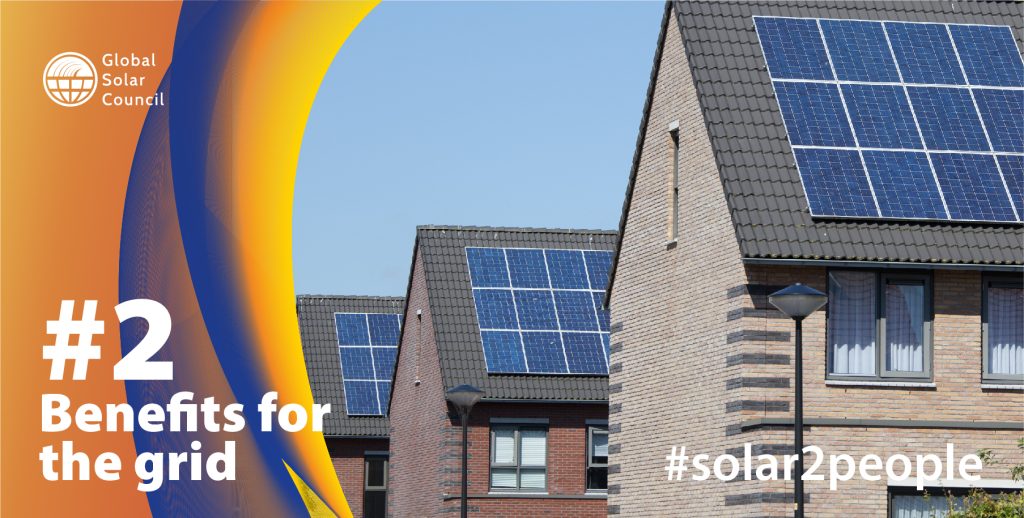 Creating a sustainable future can only be possible through developing self-sufficient, climate smart, inclusive communities. A global systemic shift is necessary from centralized power production towards a decentralized, distributed one in which the energy is produced near where it’s consumed. Renewables, solar in particular, are the key enablers of this change.

Solar power is one of the cleanest energy sources we have right now. It is also available everywhere. In fact, there is even more solar power that hits the earth every day than what the entire world can use in a whole year. Thanks to advances in technology, we have increasingly efficient ways to harness it and provide clean electricity to households, businesses, industries , public and commercial buildings, and more.

So, along the sustainable transition, we learned that solar power can bring significant health and economic benefits to the people. But did you know it can also benefit largely the power grid?

The use of ​​distributed generation units like solar panels coupled with small scale energy storage systems help maximize self-consumption and reduce grid congestion, and can smooth out the grid’s demand curve. Instead of using traditional sources of energy, owners can utilize the energy that the panels harness. It is important that rooftop solar plants are sized according to the demand they’ll need to satisfy, to minimize the excess energy to be fed to the grid and reduce investment cost in storage. In fact, in ideal systems the regulations would incentivize self-consumption more than feeding excess energy to the grid precisely to minimize grid stress. Also, since energy is produced on-site, there is less necessity to channel power along transmission lines, which eases the overall stress on the grid, reduce the need of transmission grid implementations and  prevent energy grid losses thus producing significant savings.

Did you know that energy loss costs billions of dollars every year?  In fact, in general we lose about 5%-10% of all the electricity generated through transmission and distribution in the grid and this is a huge amount of energy.

Distributed solar power addresses this issue. Since solar energy systems produce clean, renewable electricity on-site, it reduces the amount of power utility companies need to generate and to transmit along transmission lines. As a result, it lessens and controls electrical loss.

Solar power offsets the need for spending on grid upgrades and maintenance. Reduced power grid demand peaks, less energy loss, and minimal grid stress delay the need for any infrastructure upgrades and maintenance. As a result, utility companies can save on maintenance expenses, lowering operating costs just investing in new and more modern grid balancing systems that take into account the presence of distributed generation and storage systems. This is good news for average electricity consumers because utility companies pass a portion of those expenses to them.

In fact, power distribution companies do not charge consumers only for the actual electricity that they consume. They also charge to get that power to the households or establishments. If  solar power is utilized, consumers will help reduce the electricity used in the transmission and distribution lines which will lower the consumers’ electricity bill.

Distributed solar power makes the grid less vulnerable to disruptions caused by power outages, extreme weather events and conflicts. If a grid has a high penetration of solar power and energy storage, there will be thousands of energy production centers that are spread out. This strengthens the grid and protects it in case of overload or disasters.

Moreover, due to the decentralization of the grid, blackouts in certain areas will not affect people from nearby regions. By producing energy near where it is consumed we also reduce potential issues on longer transmission lines, with the power grid becoming more and more focused on providing backup power and channeling excess energy.

The global economy is transitioning toward electrification of all sectors, which together with higher living standards will result in higher electric energy demand. Renewables and energy efficiency will help meet such demand by controlling consumption. Distributed systems like rooftop solar allow for reduced investments in grid upgrades and instead higher investments in smart grids, smart housing technology and energy efficiency for more localized benefits for every citizen.

Distributed solar PV can also boost the development of smart grids and the integration of electric mobility due to the decentralized nature of the system. Furthermore, electric vehicles’ batteries added to the storage systems coupled with rooftop solar can provide much needed services to the power grid enhancing its stability.

Energy demand is inevitably increasing along with economic growth, to the point where we would need huge investments to improve power grids. Distributed solar PV helps meet energy demand locally, implying lower investments in transmission lines and on the grid in general. This has huge impacts in fast-developing countries where the grid is absent or weak and distances are very large so that it becomes uneconomical to extend or improve outdated power grids. In such environments, it would be easier to create new smart and micro grids – and even off-grid systems – specifically designed for renewables and self-consumption. Exploiting the savings generated by reduced investment needs in transmission lines and power grids, thus allow for a technological leap directly to smart grids that allow for self-consumption, larger access to power and higher overall resiliency.