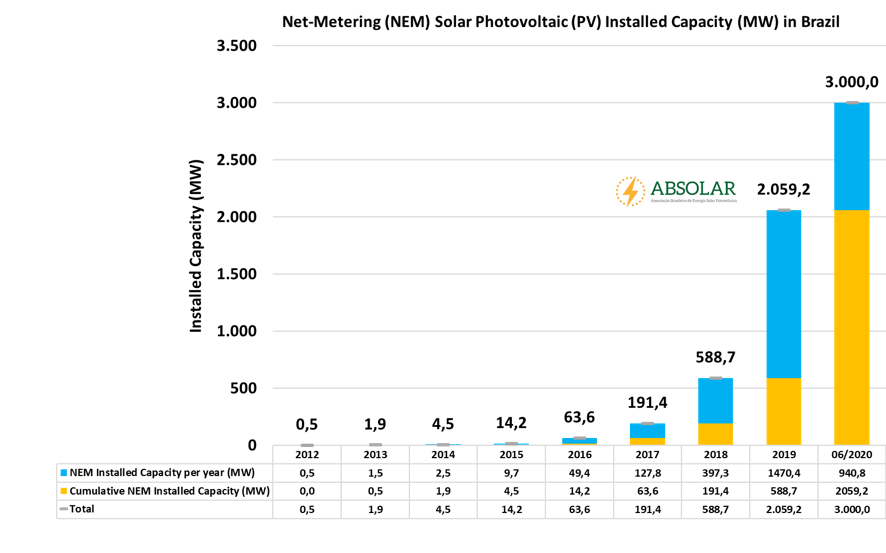 According to ABSOLAR, the country currently has 255 thousand solar photovoltaic systems connected to the grid, representing over R$ 15.2 billion in accumulated investments

According to a mapping from the Brazilian Solar Photovoltaic Energy Association (ABSOLAR), solar photovoltaic energy – based on the direct conversion of solar radiation into electric energy in a renewable, clean and sustainable way – comfortably leads the distributed microgeneration and mini-generation segment, with over 99.8% of the installations in the country.

“ABSOLAR celebrates the 3 GW milestone for solar energy in distributed generation in Brazil. However, the country is still only in the beginning of this energy transition process to a cleaner and more sustainable matrix, since the distributed photovoltaic technology only represents 0.4% of the total consumer units that exist in the national territory, currently around 84.4 million”, Ronaldo Koloszuk, ABSOLAR’s president of the Board of Administrators, comments.

To Rodrigo Sauaia, ABSOLAR’s CEO, the solar photovoltaic energy is a strong driverfor the creation of job and income and for the attraction of private investments to Brazil, especially when it comes to distributed generation. “The Brazilian solar photovoltaic sector has already created over 165 thousand jobs since 2012, spread throughout all regions of the country. In the first five months of 2020 alone, the market created over 37 thousand jobs, even amidst the economic and sanitary crisis faced due to Covid-19”, he stresses out.

In numbers of installed systems, residential consumers are on the top of the list, representing 72.4% of the total. Next are the companies from the commercial and services sectors (18.0%), rural consumers (6.6%), industries (2.6%), public power utilities (0.4%) and other kinds, such as public services (0.04%) and public street lighting (0.01%).

In terms of installed capacity,  consumers from the commercial and services sectors lead the use of solar photovoltaic energy, with 39.5% of the installed capacity in the country, closely followed by residential consumers (38.5%), rural consumers (11.7%), industries (8.7%), public power utilities (1.4%) and other kinds, such as public services (0.1%) and public street lighting (0.02%).

According to the entity, Brazil currently has 255 thousand solar photovoltaic systems connected to the grid, bringing economy and environmental sustainability to 319 thousand consumer units, adding up to over R$ 15.2 billion in accumulated investments since 2012, distributed throughout all regions in the country.

In order to closely follow the evolution of distributed solar photovoltaic microgeneration and mini-generation in the Brazilian States, ABSOLAR developed a National Solar Photovoltaic Ranking, comparing the installed capacities in each Federation unit.