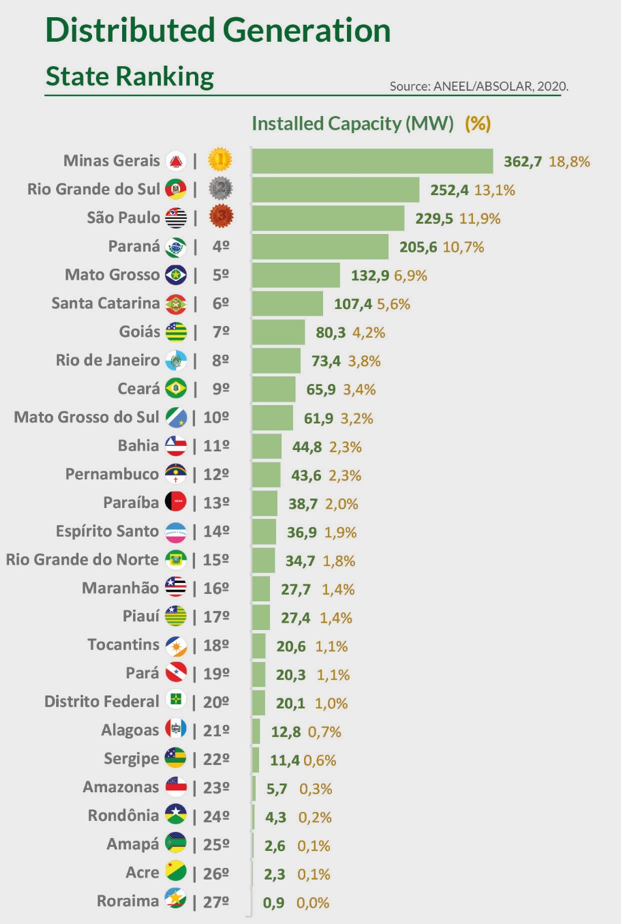 According to ABSOLAR, although Brazil has advanced strongly in recent years, the country’s distributed solar PV potential is still full of opportunities and remains largely untapped

According to data published by the Brazilian Photovoltaic Solar Energy Association (ABSOLAR), solar PV represents 99.8% of all distributed generation installations in the country, with a total of 171 thousand solar PV systems connected to the grid, representing over R$ 10 billion (US$ 2.4 billion) in cumulative investments since 2012, spread throughout the country’s five regions.

Ronaldo Koloszuk, president of Board of Administrators of ABSOLAR, evaluates that there are many opportunities to be developed in the country, considering that the Federal Government and the National Congress signaled that they intend to develop adequate policies for distributed generation in the country. “Recent comments from president Jair Bolsonaro and from the main leaderships in the House of Representatives and in the Federal Senate indicate that there is a cross-party consensus on the strategic importance of solar PV for the economic, social and sustainable development of Brazil”, he points out.

“The next step, now, is to build a legal framework that is transparent, stable, predictable and fair, eliminating the legal uncertainty that hovers above the market and strengthening the trust of the society in a future with more freedom, prosperity and sustainability for the consumers and for the population”, adds ABSOLAR’s CEO, Rodrigo Sauaia.

Residential consumers are on the top of the list in number of solar PV systems installed in Brazil, representing 72.6% of the total. In second place are the companies from the commerce and services sectors (17.99%), followed by rural consumers (6.25%), industries (2.68%), public buildings (0.43%) and other types, such as public services (0.04%) and public street lighting (0.01%).

In order to follow closely the development and evolution of solar PV distributed generation in the Brazilian States, ABSOLAR developed and maintains a National Distributed Generation Solar PV Ranking, which compares the capacities and shares in each State.

Minas Gerais, Rio Grande do Sul, São Paulo and Paraná kept the first four positions in the ranking, respectively, while Mato Grosso rose to the fifth position, surpassing Santa Catarina, which is now in sixth place.