Solar PV should be at the heart of any decarbonization strategy 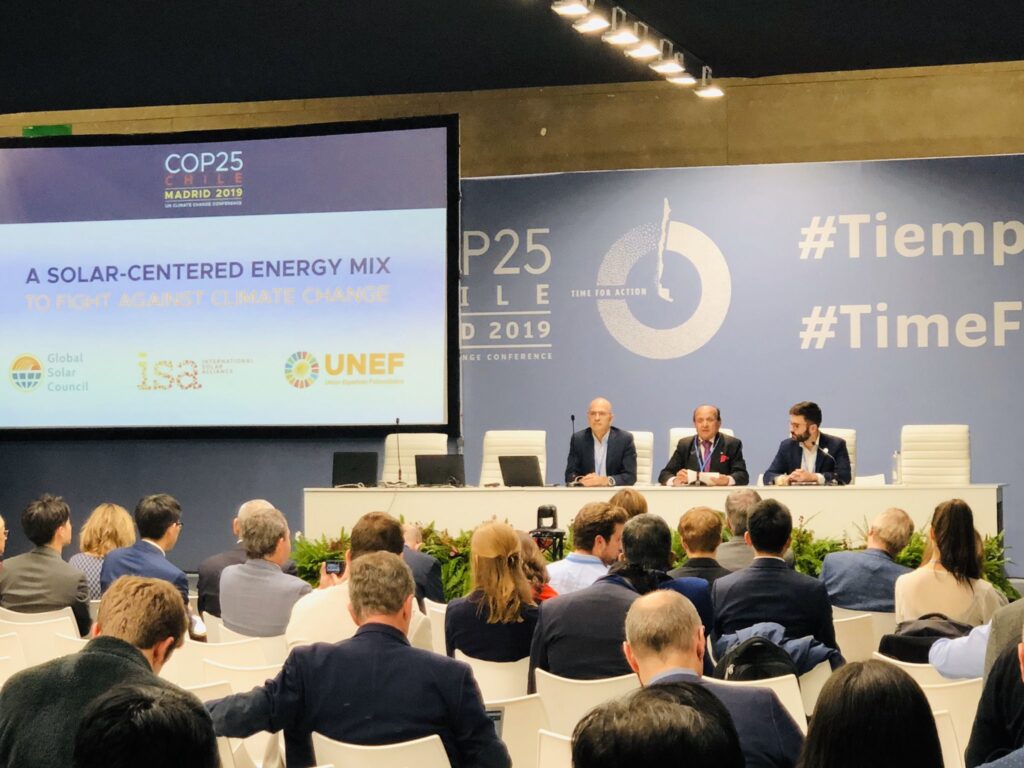 Jeffrey Sachs urges “zero emissions by 2050” as the only target for countries at next year’s COP talks.

Madrid, December 12th, 2019 – Solar PV plays a key role in the fight against climate change as advances in technology and reduced costs make it the cheapest energy source in most parts of the world it is. As a result, solar PV can help raise the ambition of the decarbonization policies of many countries towards the goals of the Paris climate agreement (National Determined Contributions). This was one of the key messages of the event organized by the Global Solar Council within the 25th Conference of the Parties to the United Nations Framework Convention on Climate Change (COP25), with the collaboration of the Spanish Solar PV Association (UNEF) and the International Solar Alliance (ISA).

During the event, Jeffrey Sachs, special advisor to the United Nations, highlighted that “With currently announced policies we are on a path to a 3°C increase of the global temperature. Next year is the final opportunity for the world to stay below 1.5°C and maintain climate stability. Zero emissions by 2050 should be the only target for all the countries coming to the COP next year. We have to insist that Governments set out plans to achieve this goal“. He also added that Europe and Asia should work together to lead the energy transition.

In this regard, industry experts highlighted that solar energy should be at the heart of any decarbonization strategy and that regulatory stability is vital to meet climate goals. Solar can be applied both to rural communities, as it can increase access to electricity in the poorest regions of the world, and in the electrification of the industrial sector, where solar PV is the best solution to achieve zero-emission electricity. Pranav Mehta, Chair of the Global Solar Council, stated: “Solar energy has strong potential for poverty alleviation. It is important to have clear and long-term regulatory frameworks so the private sector brings sustainable investments to developing countries“.

Another key message of the event was that the energy transition will not be possible unless it is a fair transition. It is clear that the employment status quo will change with the energy transition, but solar PV can cover that gap creating a great number of jobs in all its associated industry, both from utility-scale plants and distributed generation projects. In this sense, it was highlighted that solar PV can help meet many UN Sustainable Development Goals, not only Goal 7 of affordable and clean energy and goal 13 of climate action, but also goal 8 of decent work and Goal 9 of sustainable industrialization and resilient infrastructure as well as poverty alleviation. The International Renewable Agency (IRENA) has estimated that solar has created 3 million jobs and the Global Solar Council has committed to work for creating 10 million jobs worldwide by 2030.

Solar energy is projected to see dramatic growth, passing from 600 gigawatts (GW) installed at present to reach 1 terawatt (TW) in the next three to four years and multiple terawatts beyond that. In Europe, almost 17 GW of solar PV was added to the grid in 2019 according to SolarPower Europe’s EU Market Outlook, and experts foresee the beginning of a new solar growth decade, in which Spain will be a leader market.

“We need to change the mindset of citizens from consumers to producers, as distributed generation provides an opportunity to produce one’s clean energy and to contribute to the fight against the climate crisis. The time for solar is now. It’s time for action” said José Donoso, UNEF General Director.

At the event in Madrid, the Global Solar Council stressed that widespread use of solar energy – which includes applications such as solar cooking, drying, cold storage and not only electricity production – will be as important as overall growth numbers. For this reason, the organization’s mission is to encourage the rapid and wide-scale adoption of solar energy through cooperation, education and training, including through important partnerships with ISA, IRENA and its many member associations.

The Global Solar Council is the voice of the world’s solar energy industry, a non-profit body based in Washington D.C. representing national, regional and international associations as well as leading solar sector corporations. Founded at the 2015 Paris climate conference as a private-sector response to the climate emergency, the Global Solar Council brings together associations from both established and emerging markets that represent companies all along the solar supply chain.

The Spanish PV Association (UNEF) is the sectorial association of photovoltaic solar energy in Spain. It is composed by about 400 companies and entities of all the technological value chain. It represents more than the 85% of the sector’s activity in Spain and brings together almost the whole of: producers, installers, engineering, raw materials producers, modules and components manufacturers and distributors. UNEF also has the presidency and the secretariat of FOTOPLAT, the R&D platform for PV in Spain.