Solar PV will create over 120 thousand jobs in 2020, ABSOLAR projects 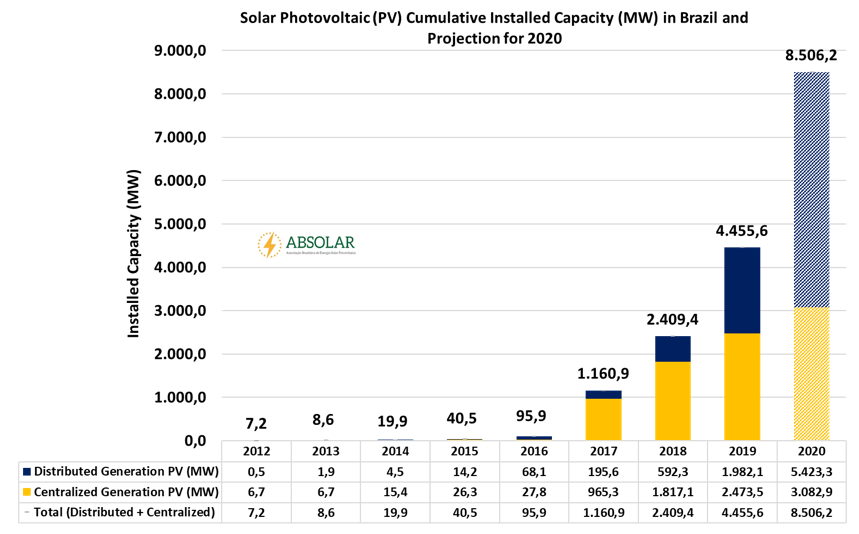 According to the entity, the sector will generate over R$ 19.7 billion in new investments and R$ 5.3 billion in income from taxes in 2020

São Paulo, January 2020 – Projections from the Brazilian Photovoltaic Solar Energy Association(ABSOLAR) indicate that solar photovoltaic will generate over 120 thousand new jobs to Brazilian citizens in 2020, spread throughout all regions of the country. According to the entity’s assessment, the new private investments in the sector may surpass the R$ 19.7 billion figure this year, adding up the distributed (systems in buildings roofs and façades) and centralized (large solar plants) generation segments.

The perspectives for the sector are that 2020 will end with a cumulative amount of more than 250 thousand jobs in Brazil since 2012, distributed among 15 thousand companies from all value chain segments. The larger amount of jobs creation should come from over 14 thousand small and medium-size companies of the distributed generation segment, which are responsible for over 162 thousand cumulative jobs.

Distributed generation will correspond to R$ 16.4 billion of the R$ 19.7 billion investments this year. According to ABSOLAR’s analysis, over 4 gigawatts (GW) of new capacity will be installed, including large-scale power plants and distributed systems on roofs, façades and ground mounted. This will practically double twice the current installed capacity in the country, currently of 4.4 GW.

In the case of distributed solar photovoltaic generation, ABSOLAR estimates a 170% growth compared to the total cumulative amount until 2019, rising from 2.0 GW to 5.4 GW. In the large-scale market, the predicted increase will be 25%, going from the current 2.4 GW to 3.0 GW.

The entity also projects that the Brazilian solar photovoltaic sector will be responsible for a net increase of over R$ 5.3 billion income from the federal, state and municipal government taxes. This contributes to strengthening the public budgets and the provision of better services to the Brazilian society. The amount already considers the consumers’ savings in their electricity bills, showing that the economic benefit of the sector is also favorable to the public sector.

According to the president of the Board of Administrators of ABSOLAR, Ronaldo Koloszuk, keeping the expansion of solar energy is a strategic measure to Brazil and one which is aligned to the great worldwide debate on competitivity, economic and social sustainability. “Currently nations all around the world discuss what will be the future of the next generation, as seen at the World Economic Forum, in Davos. Solar energy is one of the best solutions to fight critical problems in Brazil and in the world, such as global warming, and also contributing to the economic growth and to a better income distribution. In 2020 alone, we will generate an average of 332 new jobs per day to Brazilians. This makes all the difference to our society”, he highlights.

“This will be another shining year for the Brazilian solar photovoltaic sector, full of opportunities and helping the countries progress. The solar energy is one of the most competitive renewable sources in the country, being a strong engine to economic, social and environmental development, with the generation of jobs and income, investment attraction, diversification of the electricity matrix and wide benefits to all Brazilian consumers. Brazil has everything to gain from this technology and is advancing well to become a worldwide leader in this strategic sector”, emphasizes Rodrigo Sauaia, ABSOLAR’s CEO.