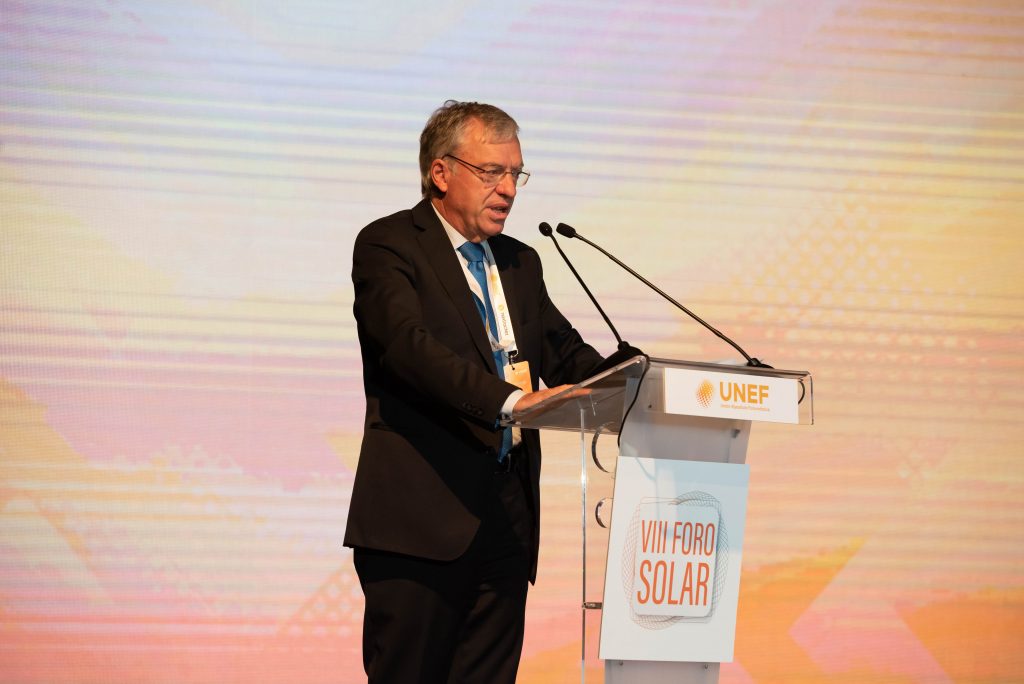 The more renewables produce, the cheaper the bill for the consumer. And the most direct and sustainable option for increasing installed capacity is photovoltaics.

Renewable auctions are necessary, but there must also be room for PPA agreements and legal certainty.

The Spanish industry is “very powerful” and Spain should value it and be proud to have companies in the sector all over the world.

In the face of the climate emergency, the environmental and social excellence of photovoltaic development is the only option. It is the greatest challenge facing humanity.

It is important to promote the industrialisation of the sector as well as the local content of the projects.

The VIII Solar Forum, organised by the Spanish Photovoltaic Union, UNEF, on 19 and 20 October in Madrid, ended yesterday with great success. It has been the great physical reunion of the sector and with the attendance of more than 725 people and fifteen round tables. The conclusion is clear: It is a decisive moment. The future is now. The ecological transition must be accelerated in order to provide a response as soon as possible to citizens who are seeing how their bills are getting more expensive.

“The more renewables produce, the cheaper the bill for the consumer. And the most direct and sustainable option to increase the installed capacity of renewables is photovoltaic energy. We have no time to lose”, said Jose Donoso, Director General of UNEF, who closed this eighth edition of the Solar Forum.

During his speech, he called on the administrations to speed up the administrative processing of projects so that bottlenecks are not created and deadlines do not run out. He was positive about the impact of the new regulations on the financing of the sector and was proud of the momentum that self-consumption has gained.

He also announced that UNEF is preparing a strategy on storage that it will present to the government and urged all companies to achieve the Certificate of Excellence for sustainability and respect for biodiversity of photovoltaic plants that the Association has launched this year. He also encouraged dialogue and agreement with municipalities, local communities… in general, with all the actors involved in this essential deployment process to face the climate emergency. “We are a strong and united sector and this is how it should always be,” he concluded.

A large part of the session focused on the new connection regulation, the contribution of photovoltaics to reducing prices and the financing of the sector now and in the future. There was consensus on the fact that renewable auctions are necessary but that space must also be left for PPA agreements. It was also confirmed that legal certainty is necessary for these to work. And something very important was added, which is that the electricity market needs to be reformed.

Regarding the regeneration of the national photovoltaic industry, Raúl Morales, CEO of Soltec, pointed out that the Spanish industry is “very powerful” and that Spain should value it and be proud to have companies in the sector all over the world. In his opinion, it needs visibility, planning, structural policies and tax credits, as in the United States. In his opinion, it is important to promote the industrialisation of the sector as well as the local content of projects. Jose Luis Moya, CEO of RIC Energy, added that the current situation “is a unique and historic opportunity for Spain. A tremendous deployment is foreseen”. Moya also stressed that photovoltaic “should be for Spain what nuclear energy is for France”.

During the second day there was also space to talk about digitalisation and innovation in the sector and how this contributes to reducing environmental impacts, for example, through applications such as agrovoltaics, which is important because it prevents desertification, contributes to the continuity of agricultural activity and reduces water evaporation. The experts who took part called for specific auctions for this type of project and highlighted the alliance between photovoltaics and the rural world.

Communication and transparency is one of the pillars of sustainable photovoltaic deployment, as was made clear during the two days of the Solar Forum. In this respect, Cristina Monge explained that the ecological and just transition requires the participation of society as a whole. “Social rejection must be avoided, social support is fundamental and essential”, she added.

Monge explained that the problems must be solved “little by little”. “Science shows that this is how progress can be made,” she explained, while affirming that the European Union can demonstrate that the GDP grows with policies to reduce CO2 emissions. “Excellence is the only option,” she concluded. We cannot allow ourselves to make mistakes, because we cannot lose this battle. As she pointed out, the climate emergency is the greatest challenge facing humanity.