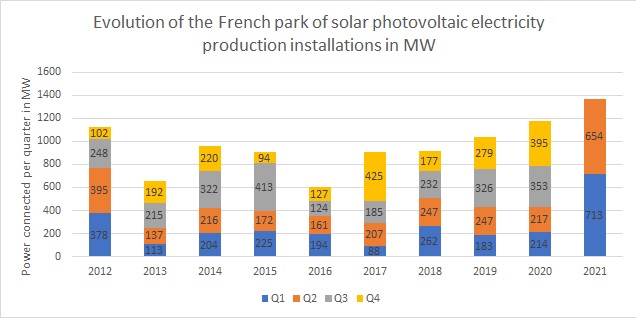 With 12.6 GW connected at the end of July 2021, the French photovoltaic park has reached a new milestone. In the first six months of this year, an additional 1,367 MW were connected, compared to 431 MW over the same period of 2020.

The bulk of the volume comes from ground and large rooftop installations, with new capacities of 950 and 400 MW respectively, but the residential segment is also particularly dynamic.

Electricity production from photovoltaic has also been up in the first half of the year with 7.6 TWh produced, compared to 6.8 TWh between January and June 2020 (+ 9%). Solar photovoltaic now represents 3.1% of electricity demand in France, which is up 3% from the previous year.

These good figures show the strong dynamism of industrialists in the sector, while the government announced this September that solar energy constitutes a priority axis of its strategy in terms of renewable electric energy.

With the launch of the next calls for tenders for the period 2021-2026 announced this summer and the fact that projects for rooftop installations below 500 kW will soon be exempt from tendering procedures and eligible to a feed in tariff (FIT), the conditions are almost met to allow the French solar sector to change scale as implied by the objectives of the Multi-Annual Energy Programme (MAEP), namely installing 3 to 4 GW of new photovoltaic capacities per year.

With this renewed economic framework, the solar photovoltaic sector will be able to continue its development and reach the ambitious target of 44 GW of solar power in France by 2028.”