UNEF insists in GENERA on the need to achieve a lasting alliance between territory, population and photovoltaic plants. 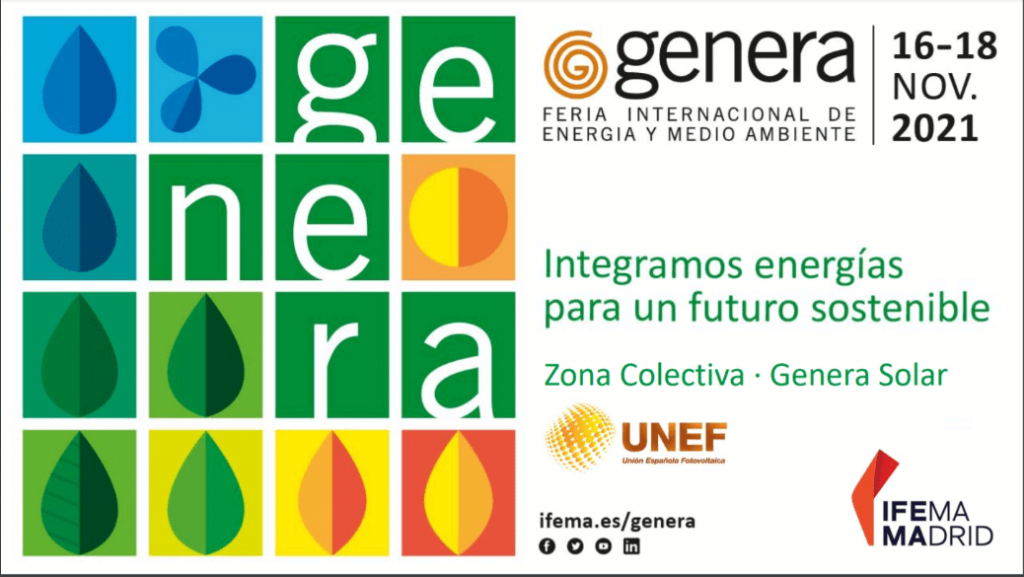 The Spanish Photovoltaic Union, UNEF, has organized today a Conference on Environment at the Genera Fair, the reference event in energy and environment at national level that is being held these days at IFEMA, in Madrid. “Photovoltaic energy is the most sustainable energy,” said Jose Donoso, General Director of UNEF, who opened the conference. “We are the guarantee of a better future. It is essential that companies, institutions and citizens collaborate together in the success of a fair and sustainable transition. The alliance between territory, population and solar plants is necessary”, he pointed out.

Jose Donoso also highlighted the success stories in photovoltaic installations that are carried out in collaboration with the municipalities themselves and the Certification of Excellence for sustainability and the conservation of biodiversity in photovoltaic plants that the Association has launched this year with the aim of promoting and recognizing projects carried out under the best criteria of social and environmental integration.

The conference began with a round table on biodiversity and renewables moderated by Eva Martínez Rull, journalist at La Razón and El Confidencial, with the participation of Santiago Martín Barajas, Director of the consulting firm EMAT; Iñigo Sabrini Sagaseta de Ilurdoz, President of the Spanish Association of Environmental Impact Assessment, and José Luis García Ortega, head of the Climate Change Program at Greenpeace.

Santiago Martín Barajas, director of the consulting firm EMAT, author of the ‘Biodiversity Study of birds and other species of fauna in three solar photovoltaic installations’, explained how in one of the plants investigated in this report, located in the municipality of Mula (Murcia), the environmental setting was practically identical inside and outside the boundaries of the park, without highlighting any negative impact. In another of the facilities studied, in Puertollano, “there was a greater wealth of fauna in the plant” than outside, according to his own words.

As a conclusion of EMAT’s research, Santiago Martín Barajas pointed out that “large photovoltaic installations, of tens or hundreds of hectares, can become a habitat for some animal species”. “What I think is most interesting is that large solar parks can be an opportunity for biodiversity” because “we have noticed, depending on the environment, that they are places where there really is fauna,” he added.

He also pointed out that it is essential for there to be agreement: to choose the site well and not those that have an intrinsic environmental value, and, in addition, that the management of the fauna is done well, in an adequate and sustainable manner both in the solar plants and in the farms where they are developed.

José Luis García Ortega, head of the Climate Change Program at Greenpeace, insisted that land use planning is necessary in the face of removable deployment and that the energy transition must put people at the center and is a process in which the whole of society must participate. For his part, Iñigo Sabrini Sagaseta de Ilurdoz, President of the Spanish Association of Environmental Impact Assessment, pointed out that the studies must become a tool for improvement and to ensure that the project is more easily authorized by the administrations and accepted by the local population from the outset. Comparative studies to correct mistakes that have been made previously in other developments are fundamental, he added.

With regard to the sustainability strategies that companies in the photovoltaic sector can adopt, Inés Monroy, Global Business Development at SENS – STEAG Solar Energy Solutions, explained how to apply ESG criteria, i.e. the integration of environmental (Environmental), social (Social) and corporate governance (Governance) criteria.

In this regard, César Álvarez Alonso, Director of EnerHi and CEO of EnerHi Hydrogen, indicated that it is necessary to undertake sustainable projects with positive environmental and local socioeconomic impacts in the medium and long term and not only for short-term economic purposes. He also explained that it is necessary to stimulate the improvement of the industrial fabric as an element of national economic recovery within and around the sector, for example, promoting R&D in storage, which will enable greater renewable penetration.

During the conference, Erica Morales, Head of Sustainability at Statkraft Spain, presented the Talayuela plant project in Extremadura and its measures to promote a positive impact on training and employment for the local population, income for the City Council and an increase in biodiversity in the area where it has been installed. This plant, he pointed out, is perfectly integrated in the landscape and it is a project that has more than one and a half million euros in environmental measures.

Along these lines, Ángel Collado, Environmental Technician at OPDE, pointed out how important it is to promote an ecosystem and to seek the most effective measures that will lead to a trophic network in which the population and local administrations are involved, taking into account the inside-outside binomial of the plant.