As a driver for ecology and regeneration, solar power can become a leader for positive impact  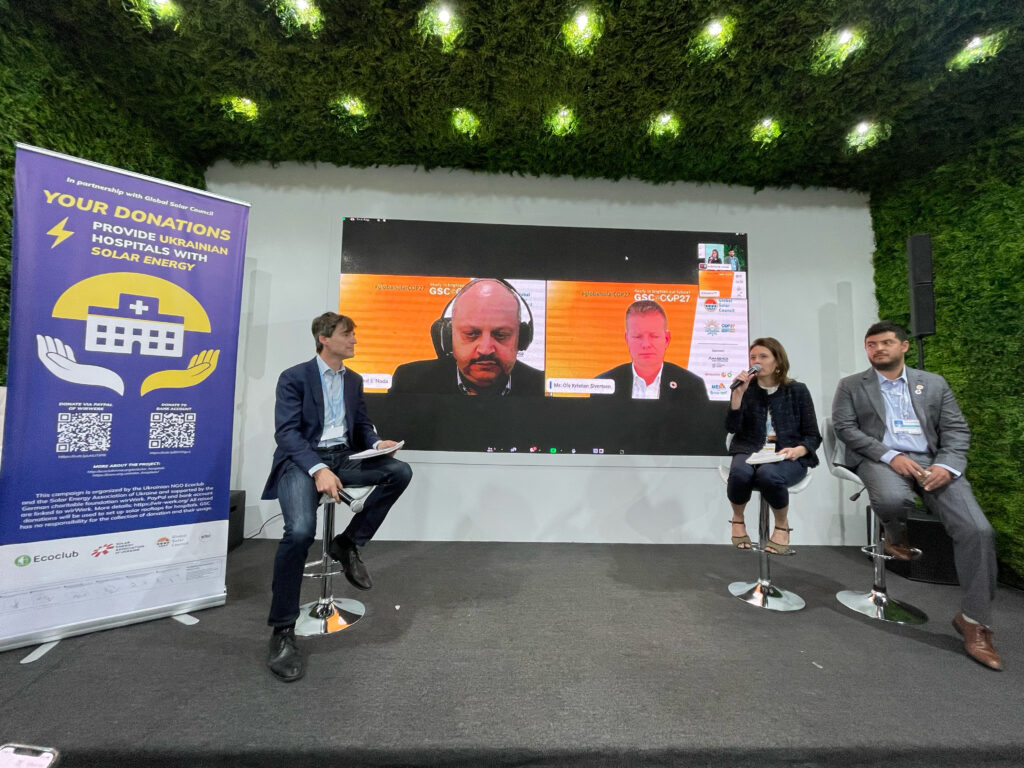 A partnership by Amarenco and Solarize Egypt provides COP27’s Blue zone with solar energy covering 20 to 25% of its power needs.

Solar infrastructure brings about important opportunities for ecology and regeneration, this was the headline of the session ‘How to reconcile Economy and Ecology? From decarbonisation to regeneration, applications and best practices’, co-organised by the Global Solar Council and SolarPower Europe at the Wind and Solar Pavilion, in the Blue zone of COP27 on November 9.

As the cheapest clean energy technology, solar energy will be deployed at a massive scale to help the world meet its climate and energy goals. Such deployment of solar infrastructure requires space and land, creating both challenges and opportunities.

So far, climate change mitigation and adaptation focused on carbon neutrality and sustainable finance developed carbon markets. But to tackle the challenges of soil degradation and biodiversity loss, finance and business models will have to evolve.

Positive externalities resulting from a company’s impact on the environment through regeneration practices should be accounted for in a new concept of profitability. In this context, public and private capital can blend to generate higher-value clean power.

Furthermore, greening the surrounding ground area of a power plant can help lower the temperature by as much as 8-12 degrees, directly benefiting panels’ efficiency in areas with high average temperatures. This helps reduce the payback time for this kind of investment.

“From ‘do not significant harm’ to ‘do create positive impact’, the solar energy sector can become the leader in positive impact by reintegrating nature into the equation, promoting the emergence of a regenerative economy”, said Eva Vandest, Group Head of Public Affairs, Amarenco.

Amarenco, a leading power producer in the solar energy sector operating in more than 14 countries and notably one the leading historical agrivoltaic investor in Europe, promotes a change in paradigm with solar energy: reconciling economy and ecology by investing in RE.Generation, thanks to its Echo pledge.

With the Echo pledge, Amarenco allocates a capital amount – proportional to the size of its power generation and storage project pipeline – to the regeneration of ecosystems, soil health, biodiversity, and water management, by converting degraded, polluted and uncultivable land into clean energy cluster, carbon sinks, biodiversity sanctuary and even farmed land based on regenerative agriculture.

Notably, a joint venture of Amarenco and Solarize Egypt provides COP27’s Blue zone in Sharm El-Sheikh with solar energy covering 20 to 25% of its power needs.

The Global Solar Council (https://www.globalsolarcouncil.org) is the voice of the world’s solar energy industry, a non-profit body representing national, regional and international associations as well as leading solar sector corporations. Founded at the 2015 Paris climate conference as a private-sector response to the climate emergency, the Global Solar Council brings together associations from both established and emerging markets that represent companies all along the solar supply chain.

With its extensive expertise, Amarenco is a leading Power producer in the solar energy sector and a leader of the transformation of our development model in our market. Amarenco operates in more than 14 countries around the world and is the largest agriphotovoltaic actor in Europe. More than an energy producer, we want to be an active catalyst in the transformation of our economy and make the words sustainability and profitability genuinely compatible. Amarenco is therefore one of the first companies to pledge to allocate a share of its fund for the regeneration of the local ecosystems through its ESG program ECHO. At Amarenco, we have a wide range of infrastructures offering a competitive edge to our customers and partners through the integration of low-carbon solar electricity production that is local, economical and can be a source of income.

The  MESIA  Alliance is composed of the Middle East Solar Industry Association, Pure Energy and Jinko Solar. The Alliance was formed to join the Global Solar Council, as a supporter of the Wind and Solar Pavilion at  COP 27. MESIA is the only non-for profit solar association bringing together the whole solar sector across the entire Middle East and North Africa (MENA) region.

JinkoSolar (NYSE: JKS) is a global leader in the solar industry. The company distributes its solar products and sells its solutions and services to a diversified international utility, commercial and residential customer base in more than 80 countries worldwide

SolarPower Europe is the European solar industry association, representing over 280 members across the entire solar value chain. Our aim is to ensure that solar is the leading energy source in Europe by 2030. With solar sitting on the horizon of unprecedented expansion, we work together with our members to create the right regulatory and business environment to take solar to the next level.