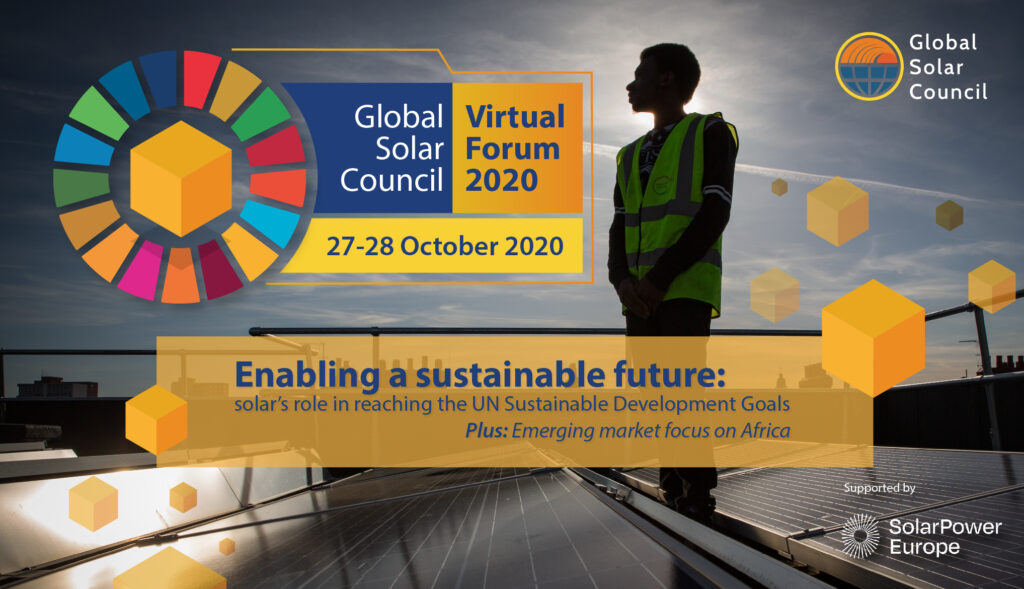 4 November 2020 – African countries are accelerating investments in solar photovoltaics (PV) as a way to meet surging growth in power demand and grid expansions while closing the gap on access to electricity by 2030, including with off-grid and micro-grid solutions.

In a region that’s facing explosive growth in electricity needs, the International Renewable Energy Association (IRENA) forecasts large expansion in solar PV in the coming decade and expects PV will make a big contribution to total installed capacity in various African regions: for example, IRENA sees potential for 83 gigawatts (GW) of solar installations in eastern Africa by 2040 and 62 GW in southern Africa. In west Africa, the ECOWAS Power Generation & Transmission Masterplan forecasts 36 GW in PV by 2033.

The Global Solar Council dedicated its first Virtual Forum to discussing how solar PV can accelerate progress towards the UN Sustainable Development Goals (SDGs) and analyzing the potential of African PV markets, hearing from 20 industry and sector experts, regional bodies for promoting renewable energy and representatives of national industry associations. During the Africa session, organized in collaboration with SolarPower Europe, the Global Solar Council announced the creation of a regional task force focused on Africa with the goal of promoting cooperation among PV associations, sharing best practices and promoting high potential emerging markets to international investors. The task force is one of three set up by GSC in 2020, with the other two focusing on Latin America and South East Asia.

José Donoso, chair-elect of the Global Solar Council, commented: “PV is the ideal solution for Africa because it is the cheapest way of producing electricity and offers scalability combined with the possibility of tailored solutions. Solar energy can resolve the problem of electrification of the continent.”

“Africa is indeed the next solar PV destination,” stated Niveshen Govender, Chief Operations Officer at the South African Photovoltaic Industry Association (SAPVIA) and coordinator of the Global Solar Counciltask force on Africa. “There are a vast number of opportunities, but this is not without the various challenges each of us face within our countries and in Africa as a whole: from policy and political will, to enabling regulatory environments, to skills development and capacity building, right through to localization and industrialization.”

The GSC Virtual Forum heard how solar power is set to play a key role in unleashing an array of environmental, social and economic benefits and can accelerate our trajectory towards the SDGs, thanks to PV’s ability to deliver not only our climate objectives but also bring advantages in terms of employment, health, education, gender equality and poverty alleviation.

In particular, current policies will leave 530 million Africans without access to electricity in 2030, equivalent to 80 million households. That means we have a 7% gap to make up in order to achieve universal access to modern energy services as required under the SDGs.

David Lecoque, CEO, Alliance for Rural Electrification (ARE), pointed out the important role that off-grid and mini-grid technologies will play in increasing access to electricity in Africa thanks to PV solar solutions or hybrid solutions where PV is coupled with existing fossil-fuel based applications. He outlined the kind of policy and regulatory measures needed to ensure successful adoption of decentralized solar on the path towards universal electrification goals.

With 6.6 GW at the end of 2019, the African continent still represents only 1% of the world’s installed PV capacity. David Wedepohl of the German Solar Association (BSW-Solar), presenting findings of the Intersolar Solarize Africa Market Report 2020, commented: “Paradoxically, the global growth of photovoltaics so far took place outside the sunniest regions of the world. Tapping into the discussions in the various markets, we have found a new mood of invigoration. Our report sheds light on the large wave of solar power installations that is now starting to form on the African continent”.

The report also highlights that around 1 billion people in Africa do not have access to safe drinking water, showing the huge potential for solar desalination, solar irrigation/pumping and solar water disinfection applications already being used on the African continent.

The GSC event also heard from Michael Kiza of the East African Centre of Excellence for Renewable Energy and Energy Efficiency (EACREEE) and Dr. Maged Mahmoud, representingthe Regional Center for Renewable Energy and Energy Efficiency (RCREEE), which covers the Arab countries including North Africa, who together outlined developments in the policy and regulatory landscape in support of solar PV investments. Progress on those fronts is critical if African countries are to attract foreign investors and project developers to spur installations.

“Even though Africa is a good destination for renewables, the rollout has been slow due to uncertainty, lack of regulation and poor financial markets,” said Robert Wagener, representing the perspective of an international investor on behalf of the Emerging Markets Workstream of SolarPower Europe. “However, if policymakers institute the right framework and policies, the market could be significant for the continent and the globe. Given the significant price drop of solar PV and its flexibility in sizing and implementation, solar PV has a high potential to become the hero of the build out of electricity production in Africa.”

Several African PV associations wrapped up the event by highlighting the positive potential for the continent’s solar industry.

“With some of the best solar arrays in the world, the ever falling solar PV prices and improved collaborations, Africa can meet some of its SDG goals, particularly SDG#7 – access to affordable and clean energy for all, by 2030,” said Isaiah D. Nyakusendwa, Chairman of the Renewable Energy Association of Zimbabwe (REAZ).

“The time has come to turn the vastly discussed solar energy potential of African countries into reality,” said Ricardo Costa Pereira, President of the Associação Moçambicana de Energias Renováveis (AMER). “It’s time we take the theory and put it into practice.”

Enoch Agyepong, Director of the Renewable Energy Association of Ghana (REAG), outlined how his country is working to achieve a goal for competitively priced energy that is universally accessible in an environmentally sustainable manner for the local market and for export.

“The requirement for outside investors who are coming to invest in solar is that they partner with indigenous companies, so we all move together,” commented Geoffrey Kaila, Chairman of the Solar Industry Association of Zambia (SIAZ). “We are looking for partnerships.”

“Nigeria is a big market that all interested investors should take a look at: policies are being developed, the government is showing political will and we are also seeing good collaboration between the different regions of Africa,” commented Segun Adaju, President of the Renewable Energy Association of Nigeria (REAN).

“African renewable energy associations have a lot to learn from each other and the experiences of different markets, so we really need to work together and learn from each other,” said Prosper Magali, Vice President of the Tanzania Solar Energy Association (TAREA). “We also need to push for local, indigenous companies to come aboard to implement these solar projects.”

Presentations and recordings from the event are available at: https://www.globalsolarcouncil.org/pages/global-solar-council-virtual-forum-2020/ and on the GSC YouTube channel (https://www.youtube.com/channel/UC_FWNu2LBwveETu7ctWmUMQ/featured).

Notes for editors
The Global Solar Council (https://www.globalsolarcouncil.org) is the voice of the world’s solar energy industry, a non-profit body representing national, regional and international associations as well as leading solar sector corporations. Founded at the 2015 Paris climate conference as a private-sector response to the climate emergency, the Global Solar Council brings together associations from both established and emerging markets that represent companies all along the solar supply chain.