Solar Forum: We are on the right track but the devil is in the details 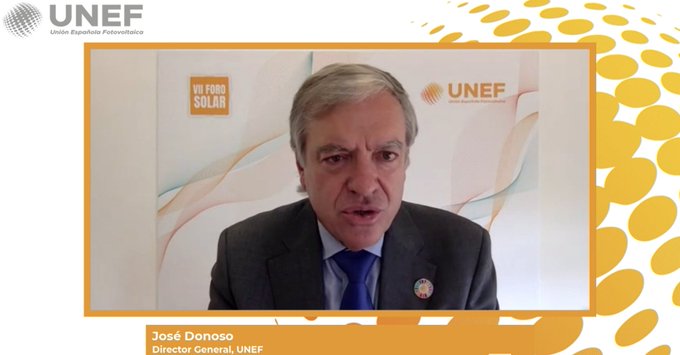 UNEF’s General Director of, José Donoso, closed the three days of the 7th Solar Forum by drawing up some conclusions from the discussions of the 13 tables in which the most relevant actors in the photovoltaic sector met, from CEOs of producers’ companies, technicians, installers, environmental agents and agricultural representatives, national and local politicians, to the banks, which spoke about the financing of the projects. The meeting, which took place in digital format in the face of COVID health crisis, has borne fruit as a platform for networking and direct contact between attendees. This is the “x-ray” of the sector.

Donoso thanked Teresa Ribera, fourth vice-president and minister for the Ecological Transition and the Demographic Challenge, not only for her presence but also for the legislative work developed during the last years creating a positive regulatory framework. “It has been noted during the interventions of the Solar Forum that we are on the right track. Although there is still work to be done. The devil is in the details”.

Funding is essential. “Now there may be many GW projects that are applying for connection point, but if in the end there is no funding for those GWs they may remain in megawatts or kilowatts. And what investors are asking for is security and regulatory stability, which is required in any normal economic sector”.

One of the most repeated references during the three days of the meeting was “that statement by the International Energy Agency naming our technology as the king of the electricity sector and the cheapest way to produce electricity that humanity has ever had, makes us look at it with optimism. These are achievable goals”. Even, said the Director General of UNEF, “on our side they are surmountable”.

But the sector is not exempt of uncertainties. How the price will be assigned to all those gigawatts now is fundamental. “Contrary to what you might think, most of our sector would like to go to the market and forget about having to wait for auction decisions, or feed-in systems”. However, Donoso has drawn on the experience of the market in March and April, “it has been an interesting regulatory sandbox. When penetration of renewables reaches 72 or 73%, the price of that market collapses. And it cannot be any other way, we have a marginalist market for technologies that in this next decade are going to be in the majority and in many parts of the day they are going to be 100%, with no marginal costs. So, by 101 Economy’s principles, a market which assigns prices according to marginal costs cannot be an efficient allocator for technologies that do not have them”.

The need for auctions was another point of controversy. “The positioning of the sector is, of course, not common for all the parts. There are companies that do want auctions, others say no, some that it will distort other markets, the marginal market or PPPs. PPP is not an end in itself, it is a way to achieve financing, but we cannot consider how we build an ideal model for PPA. Only if that PPA is the most efficient solution to assign the price. In the end, whether or not the auction treatment depends on the strategic positioning of each company, it depends on their ability to raise financing in the markets.”

Donoso recalled the economist Jordi Nadal, when he spoke of the failure of the industrial revolution in Spain. This is something we cannot afford, to repeat the experience of the railroad, we are going to invest 20 or 25,000 million euros in our country in photovoltaic alone. We have the foundations of an industry that, in part, disappeared because of the previous crisis, but in part survived and was clearly resilient. Today we have five of the ten largest manufacturers of trackers in the world are Spanish, three of the ten largest manufacturers and potential investors are Spanish, we have the largest EPC – Engineering, Procurement and Construction- in the world, the best promoters. We have the bases and the tools to do what is our dream, that Spain becomes the real photovoltaic hub of the world. But we have to do things right. The condition sine qua non, we need an stable growth in the next decade. More than just subsidies, what is needed is stability, and then doing things right.”

“To do that we need our industry to grow, we need our companies to grow. It was seen in the session. We need to be brave, we need to go to clusters, to alliances, we need companies with greater financial muscle, because we need R&D, we need innovation. But innovation is not going to guarantee our competitiveness, it is going to guarantee our survival in a tremendously competitive sector in which there is downward pressure on prices with these international auctions, with these very aggressive PPAs.  We have to add design, imagination, financial capacity. For this hub to be a true industrial revolution, which will help other sectors, because one of the great advantages of our technologies is that they are transversal, to be competitive as well”.

We are behind in terms of access and connection rights, a real bottleneck in the sector. But we are at the point where we have to regulate well, “we have to eliminate, and we are the first sector to say so, all those speculators who do not bring added value to the sector. We must ensure that we prioritize the most mature projects, which show that their commitment to the project is more serious and that they will be able to connect it sooner, not that someone comes along and occupies a few connection points for a few years without those connection points being used. Every month that we fall behind for a month, it is a month that stops generating employment, is a month that we continue emitting CO2 and we continue emitting the most expensive electrical energy”.

The other bottleneck is administrative processing. “It is administrative rationalization, it is not about making administrative procedures laxer”. In the case of self-consumption, “that there are municipalities in Spain that take six to ten months to give a license to install a photovoltaic panel in a townhouse, it is sincerely a shame. UNEF has already achieved that eight regions abolish the need for the building permit, and it has been replaced by a prior communication plus as statement of responsibility, as they do in any country in our environment.”

We must ensure that all actors in this market have symmetrical information on the points of connection, that no one has an advantage or can abuse a dominant position, Donoso said. At the Forum it was seen “the need to put an end to the sole node interlocutors, and that it should be Red Eléctrica that assumes responsibility for these connection points, both at the level of the connection networks and distribution, not someone who directly or indirectly has an interest in the decision they are making”.

A realistic perspective on hydrogen, and expectant about self-consumption

As it could not be otherwise, the Forum has addressed the issue of hydrogen.  The conclusion after these three days is that maybe we are being too optimistic, with hydrogen. “We must put, as we have been called to do also in these sessions, a little bit of realism. In today’s conditions, hydrogen will not be competitive until 2035. If there is a great political will, it seems that we could reach it by 2030”.

There is a before and after the COVID when we talk about self-consumption. “We’re not going to have the numbers this year that we expected, but it’s not going to be as bad as we feared in the toughest part of the confinement either. We’re looking forward to it. There are still regulatory barriers, we must ensure that the distributors are not a barrier. We must also review the horizontal property law, surpluses management, collective self-consumption. Once again, the devil is in the detail. There is a great future ahead. We are waiting expectantly for the approval of this self-consumption strategy. We believe, it may be reasonable to think that we will reach 6 gigawatts by 2030. But if you really want to bet on that self-consumption, which is the zero kilometer of electricity production, with those smart cities, those smart islands, we must give a boost a little further, and the goal as a country should be to try to reach 10 GW of self-consumption by 2030.

We are the good guys

“We are the good guys, let’s not forget it, but we have to do things right”, the mantra of sustainability was also present in the largest photovoltaic event in the country. “We would only need 0.3% of Spain’s arable land to make the entire PNIEC (Energy and Climate National Integrated Plan, in Spanish) if everything was done on arable land. This is no problem. “We have to leave local benefits and above all we have to demonstrate what we say in our environmental guidelines, that photovoltaic plants can be an integral reserve of nature”. The general message left from that table of discussion is that we have to look for solutions, not confrontations, we have to dialogue between all parties, we have to look for `positive solutions for everyone”.

To finish the conclusions, Donoso referred to the financing table that ended the meeting, emphasizing what the experts say, “photovoltaic has become, like other renewable energies, a refuge value. There is a lot of money, there is financing, but this financing is not going to be given away, it is going to depend on this regulation, it will depend on how a price is assigned, on what securities, on what guarantees these banks have to finance or not. They are willing to study, but not so willing to finance.” “We have seen the example they have given us, very interesting, the auctions in Portugal. Only one project can be financed out of the 700 megawatts that have been auctioned. That is, it depends on the auction model that we have”.

Donoso quoted the sponsors of the event and thanked all the attendees by launching the call for next year, which we hope can be held in person.