The Top 5 ways that solar adoption brightens our societies 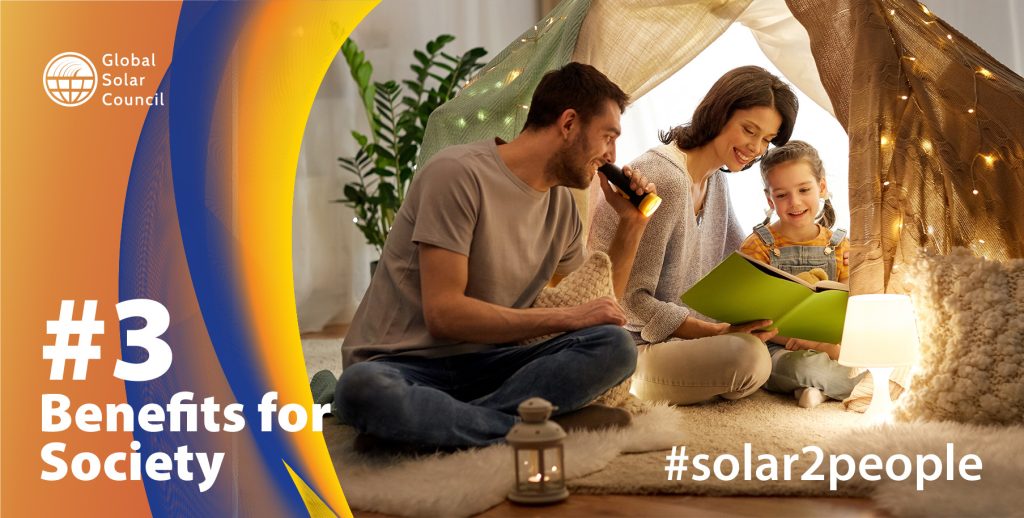 Energy security has found its way into many national agendas as the world recognizes the need for clean and sustainable energy. With many nations eyeing energy independence through solar power, societies worldwide can take great advantage of the shift.

Solar power has potential to help smart cities and energy communities position as role models for the implementation of sustainable power in societies worldwide.

From cheaper energy costs to healthier and richer societies, the benefits of solar energy are manifold. With distributed solar power, everyone can have a renewable energy source that does not harm the environment and doesn’t make any noise, which is ideal since it is usually placed on the roof of households.

Read on to learn the tangible societal benefits of solar energy adoption.

By November 2022, the planet will be home to 8 billion people. The African continent is expected to double its population by 2050, to almost 2.5 billion inhabitants, and half of that population will be under 25. Almost 1 in 4 people on the globe will be living in the sub-Saharan region in 2050. Furthermore, India is set to become the world’s most populous country in 2023.

According to the International Energy Agency (IEA), 770 million people were still living without access to electricity in 2019, 75% of which in sub-Saharan Africa.

Those dynamics raise the urgent question of how to enable that demographic shift to support decent work for all. Without access to power though, there cannot be development. Thus the urgent need for coordinated dialogue and development of solar power in those regions.

From large-scale to distributed and to off-grid, solar PV can bring electricity at stable costs to areas of the world where conventional means have failed, and development to hundreds of millions of people. In fact, Africa and India are home some of the highest solar energy potential on Earth, and PV is uniquely placed to help meet their gigantic increase in power demand forecasted for the coming years due to economic and population growth.

With growing energy needs, rooftop solar, solar home systems and solar pumps can also enable progress in education, agriculture, cooking and cooling, while generating income for households and entrepreneurs when mechanisms such as net-metering or feed-in tariffs are in place.

The world is seeing high levels of urbanization and accelerating migration: by 2050 about 66% of the world population will be living in cities. Cities occupy around 2% of the space on Earth yet they consume around 75% of the world’s energy and create over 70% of energy-related GHG emissions.

At the same time, cities are key actors in the battle against climate change as they can set climate and renewable energy targets, issue regulations to transition away from fossil fuels by enforcing the adoption of renewables in buildings, operate their own plants and produce huge savings in power consumption, dedicate resources to financing and advocacy.

The most important action for cities is to decarbonize through distributed renewable energy in buildings, and solar PV is the most promising asset in this regard. Distributed solar generation has a key role to play for the development of energy communities and smart cities, as its flexibility allows for great synergies with urban buildings and smart grids, transport and telecommunications. Production and consumption of electricity are going to change dramatically and solar PV is a fundamental driver of this process.

Apart from the power sector, solar PV has the ability of supporting the electrification of other sectors, like transport.

Tthe transport sector as a whole accounts for the highest share of final energy consumption (36% in 2019, IEA), has the highest reliance on fossil fuels of any sector and is responsible for 37% of CO2 emissions from end‐use sectors.

In cities especially, deploying distributed solar power has signifacnt positive externalities on the elctrification of transportation. There’s a direct link, in fact, from excess solar power produced on buildings’ roofs and private and public vehicles’ charging stations. Similarly, if large parking stations are equipped with rooftop solar, they can provide excess clean electricity to houses, businesses and public buildings during the day.

Increasing our worldwide capacity for renewable power is key to the sustainable transition and it also creates a flourishing new economy. Through the mass adoption of solar energy, the green industry will see massive growth, creating millions of jobs worldwide and a more inclusive labour sector.

IRENA’s employment forecasts indicate that the solar PV industry is and will remain the single-largest employer in the renewables sector enabling 20 million solar jobs for the 1.5°C Scenario by 2050. Adoption also breeds innovations in cities. Together, these changes lead to economic growth on a large scale.

Energy Security Is a Solar Panel Away

Energy costs continue to skyrocket at an alarming pace. Based on the Joint Economic Committee’s recent findings, energy costs have soared by more than 20% in the first half of 2022 alone.

Major energy supply chain disruptions resulted from the pandemic and overloaded by the conflict in Ukraine have clearly showed that a shift towards renewable energy sources is a must, to avoid risky fossil fuel dependencies and provide societies with secure access to clean and sustainable energy for years to come.

Solar energy, in particular, is freely available everywhere. In facts, the sun can provide us with energy that exceeds the global energy demand. Accelerated deployment of distributed solar power can greatly help countries and societies secure energy supplies and achieve true independence through clean energy.