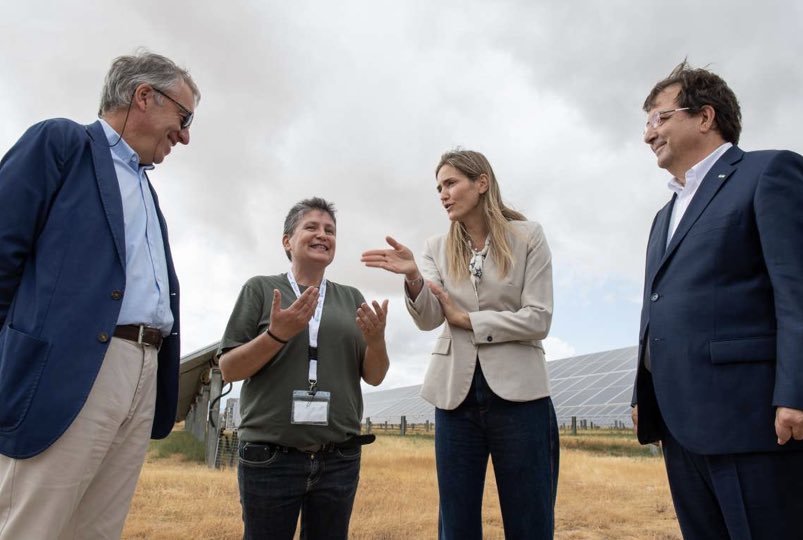 The Spanish Photovoltaic Union, the majority sectoral association for solar energy in Spain, together with Sara Aagesen, Secretary of State for Energy, and Guillermo Fernández Vara, president of the Junta de Extremadura, have delivered in Talayuela, Cáceres, the Seal of Excellence in Sustainability UNEF to nine solar energy projects belonging to the companies Iberdrola, Statkraft, Falck Renovables, Esparity Solar and Verbund.

“We have always demanded of ourselves to do things well as a sector. We believe that our future cannot be understood without coexistence and the creation of added value between the territory, the biodiversity and the projects, as if a marriage of 30 years in question, that part of the respect and mutual conviction of the positive of the initiative”, said Rafael Benjumea, president of the Spanish Photovoltaic Union during the delivery of the Seal of Excellence in Sustainability, which was created by UNEF in 2020 to communicate the best practices in the Spanish photovoltaic sector. Continuing with this work, the business association has designed its own system for the certification of the sustainability of photovoltaic installations, aimed at all companies that may be interested in obtaining it, whether they are developers, builders, owners or any other in the segment of solar energy sector in Spain.

Sara Aagesen, Secretary of State for Energy, has reiterated her commitment to accelerating an energy transition in which solar energy is one of the protagonists. “The energy transition must be carried out with the maximum social and environmental guarantees, and we must ensure that its numerous benefits reach the society of the territories in which the facilities are built,” Aagesen said.

Likewise, Guillermo Fernández Vara, president of the Junta de Extremadura, the region in Spain with the most installed solar energy capacity, highlighted during his speech “the socioeconomic opportunity that the relocation of the value chain of many of investments linked to the energy sector”. In addition,he said that “renewable energy projects such as those developed in the community of Extremadura represent an important contribution to the protection of the environment and the reindustrialization of the country.”

In addition, the Spanish Photovoltaic Union celebrates this year her 10th anniversary as the only renewable energy business association in Spain that has created a code of conduct to recognize the good practices of all those solar plants that are sustainable and respectful of their natural environment in Spain and with the socioeconomic reality of the plant environment.