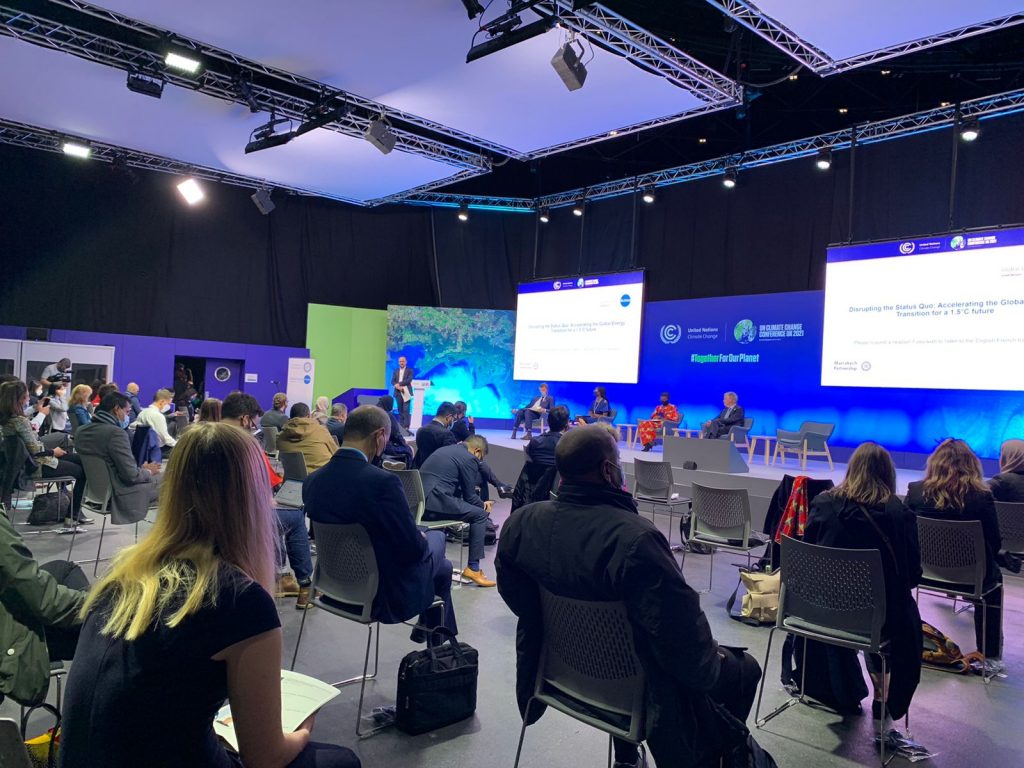 The curtain fell on the COP26 climate conference end with consensus around the Glasgow Climate Pact, which reaffirmed the objectives of the Paris Agreement and made clear the importance of keeping global warming below 1.5C. While the difficulty of some countries in abandoning coal cast a shadow over the proceedings, it meant solar PV could shine through as the best path towards rapid decarbonization.

Despite being watered down over the closing days, the final document called for continuous development of renewable sources and energy efficiency, as well as accelerated efforts to reduce the unabated use of coal and subsidies to fossil fuels. A goal of “phasing down” coal-fired power generation substituted “phasing out” but no COP decision has ever made a direct reference to abandoning fossil fuels since the Kyoto protocol was signed in 1997. The document also recognized the need to cut climate-altering emissions by 45% by 2030 compared to 2010, as well as that of achieving climate neutrality by mid-century.

The Global Solar Council will embrace this opportunity to enhance its efforts in promoting solar PV as the go-to technology for governments looking to accelerate their emissions reductions plans and align with the 1.5C target, drawing on the competitiveness of PV in economic and reliability terms with respect to fossil sources.

The Global Solar Council was among more than 40 countries and organizations to sign the Global Coal to Clean Power Transition Statement, one of COP26’s flagship initiatives. The signatories committed to rapidly scale up deployment of clean power generation and energy efficiency measures, and to promote technologies and policies in this decade to achieve a transition away from unabated coal power generation.

The GSC hailed the statement as a sign of incremented multilateral effort and cooperation towards a transition away from all fossil fuels through faster deployment of renewable energy and energy storage technologies.

The International Energy Agency has made clear that, to hit the 1.5C target, at least 40% of the world’s existing 8,500 coal-fired power plants must be closed by 2030 and no new ones added. The GSC will continue making the phase out of fossil fuels through adoption of solar PV the core of its activities in 2022 and beyond.

In the context of the Glasgow summit, other multilateral climate agreements were also signed, including a pledge by 103 nations to cut methane emissions by 30% with respect to 2020 levels by 2030, and one signed by about 40 countries and institutions to end international investments in unabated fossil fuels power generation.

COP26 also marked the deadline for updating nationally determined contributions (NDCs), set every five years since the Paris Agreement (postponed by one year due to the pandemic). Current plans on cutting emissions by 2030 are inadequate to limit temperature rises to 1.5C, according to various analysts.

One of the crucial aims for the U.K. Presidency was to draw up a roadmap for more frequent updates, and that was achieved: the revision of NDCs will be on the agenda for next year’s COP, to be held in Egypt, and in 2023, providing an important lever to ensure higher ambition on emissions cuts. This marks a period in which solar PV will need to take centre stage in terms of accelerating decarbonization efforts.

Global carbon market rules were also formally established within the Glasgow Package, as negotiators agreed on implementing Article 6 of the Paris Agreement, paving the way for more effective cross-border cooperation. The GSC welcomes the resolution and will keep promoting coordinated action towards increasingly effective carbon pricing mechanisms globally in support of a just transition through Worldwide Carbon Price, an association the GSC has founded together with other partner organizations.

The Global Solar Council was present in Glasgow to address crucial issues and pressing challenges to accelerate the energy transition, including the need for the global industries representing the two main sources of renewable energy – solar and wind – to join forces in calling for governments to step up plans for accelerated growth rates in order to meet the net zero targets. Making the renewables industry sustainable across its entire value chain has been another key theme discussed at Glasgow, addressed with the Global Alliance for Sustainable Energy.

As part of the Marrakech Partnership for Global Climate Action, the GSC has joined the Energy Action Event held at COP26 to support the Energy Climate Action Pathway. In front of climate experts, ministers and government representatives, institutions and renewable industry leaders, José Donoso, Chairman of the Global Solar Council, stressed that solar PV is an economical, flexible and clean solution to bring electricity to areas of the world where conventional means have failed, to empower communities in their energy transitions, as well as to drive the development of smart cities and energy communities.

Climate finance pledges were also raised in Glasgow, as only some $80bn flowed from rich to developing countries of the $100bn a year promised by 2020. Now the objective is $500bn for the next five years. The GSC will keep deepening solar markets and legal frameworks in emerging markets through its Task Forces, to support efficient use of the resources.