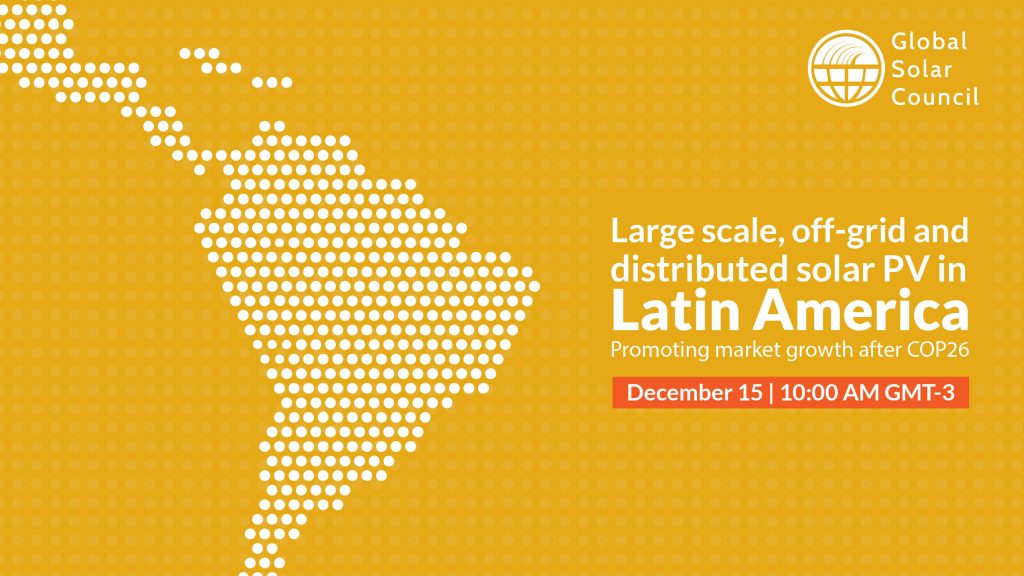 Cities are set to play a key role in leading the adoption of solar PV in Latin America and powering the transition towards renewable energy.

Cities occupy 2% of the space on Earth yet they are at the forefront of in the battle against climate change as they consume around 75% of the world’s energy and create over 70% of energy-related GHG emissions. Yet, at the same time, cities are key actors: they can set climate and renewable energy targets, issue regulations to transition away from fossil fuels by enforcing the adoption of renewables in buildings, operate their own plants and produce huge savings in power consumption, dedicate resources to financing and advocacy.

At the Global Solar Council webinar “Large scale, off-grid and distributed solar PV in Latin America – Promoting market growth after COP26,” the role of distributed solar PV in empowering homeowners and decarbonize cities was examined by members of the GSC LATAM Task Force and industry experts. The event was a moment to understand the current status and future of solar PV in Latin America and present success stories of solar PV applications in cities of the region.

In 10 years, the LATAM region’s installed capacity has grown from just 60 MW to 20 GW. However, more than 85% of that capacity is concentrated in four countries – Brazil, Mexico, Chile, Argentina. For the regional market to grow faster and more evenly, some countries need to finalize their decarbonization roadmaps and targets to let foreign investors understand what is happening in the coming decade.

“As the world needs average per capita CO2 emissions to drop to 2.4 tonnes from the current 4.8, the C40 LATAM cities are the only ones already under the threshold, but it will be challenging to maintain such level while pursuing economic growth,” said Ilan Cuperstein, Deputy Regional Director for Latin America, C40 Cities. “Thus, the energy sector is key for Latin America to stay within that range. The most important action for cities is to decarbonize through distributed renewable energy in buildings and solar PV is the most promising asset in this regard.”

An element of homogeneity across the region is the importance of developing distributed solar PV. In Brazil, home to the largest solar market of the region, where two thirds of the installed solar capacity are distributed, more than 360,000 solar jobs have been created over the past decade, said Rodrigo Sauaia, CEO of the Brazilian Solar Photovoltaic Energy Association (ABSOLAR) & Co-Chair GSC. In Argentina, some market niches are growing fast such as PV applications for water pumping, industrial parks, end of distribution lines, energy storage. Agrivoltaics, in particular, looks very promising in Argentina because of land availability, said Marcelo Alvarez, President Camara Argentina de Energia Renovable (CADER) & Secretary of the GSC.

Ana Paula Matos, Vice Mayor of the city of Salvador in Brazil, shared her experience of a successful program that empowers people through solar PV, for climate action and justice in cities.

“The Salvador Solar Program includes tax incentives for homeowners to implement solar PV and a map of solar potential of the city’s rooftops which offers a public database for any citizen to check the potential of their roof”, explained Matos. “We also offer training course to create new jobs for the installation of solar modules. This shows how the entire value chain of solar PV can bring benefits to the economic and social spheres.”

“Solar PV is one of the cleanest and cheapest ways to produce electricity and this gives us strong confidence in the industry’s future,” said José Donoso, Director General of Union Espanola Fotovoltaica (UNEF) and Chairman of the Global Solar Council. “We expect that all decision-makers will understand that solar PV is a real gateway to a future characterized by cleaner environment, inclusive access to power and at cheaper prices. And Latin America has a particularly high solar power potential. Corporates are ready to do their part in the region, but they need better planning to be put in place by governments and retroactive measures to be absolutely avoided”.